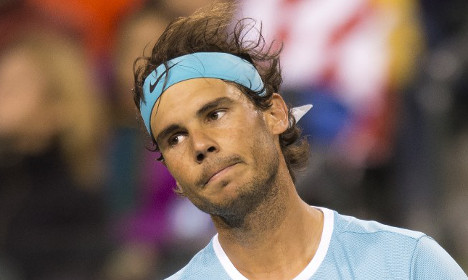 Nadal said he is seeking “justice” and will have his day in court to silence critics like former French minister Roselyne Bachelot (see photo below).

“I gonna sue her, and I gonna sue everyone who gonna comment something similar in the future, because I am tired of that,” Nadal said Sunday night at the Indian Wells hardcourt tournament.

Bachelot, who served as sports minister between 2007 and 2010, has said that Nadal faked an injury in 2012, when he missed the final six months of the season due to knee problems, in order to hide a positive drug test.

The 14-time Grand Slam champion first told AFP on Saturday night that he was going to seek “justice” and use the courts to put a stop to speculation he ever used performance-enhancing drugs. “I am tired about these things. I let it go a few times in the past. No more,” Nadal said, adding that he expected better of person who was “minister of a big country and a great country like France.”

Nadal has never failed a drug test in his many years on the ATP Tour and has always vehemently denied ever using a banned substance.

Nadal said he had been reluctant to take people who accused him of using illegal drugs to court in the past, but has now changed his mind. Nadal, the world number five, beat Gilles Muller 6-2, 2-6, 6-4 in the second round at Indian Wells on Sunday.

The former three-time Indian Wells champion moves on to face fellow Spaniard Fernando Verdasco in the hardcourt tournament, one of the biggest events on the ATP Tour calendar outside of the four Grand Slams.

The draw sets up a possible semi-final showdown between world number one Novak Djokovic and Nadal. They're nearly even in their 47 head-to-head meetings, with Djokovic owning a 24-23 edge. 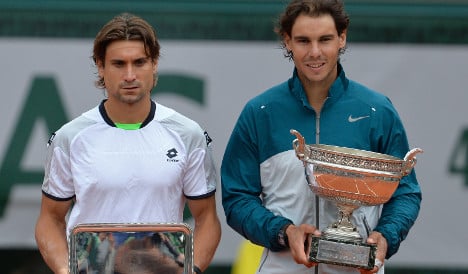 It also gave Nadal his 59th win out of 60 matches played in Paris.

However, the 27-year-old's push to victory suffered a heart-stopping moment when a protestor, naked from the waist up, leapt from the stands on Court Philippe Chatrier, carrying a flare and protesting France's controversial same sex marriage law.

The protestor, who was wrestled away by security staff, came within just a few feet of the Spaniard as he prepared to serve at 5-1 in the second set.

The drama, however, didn't alter the outcome as Nadal claimed his seventh title of 2013 after returning to the tour in February following a seven-month injury lay-off.

"Thanks to everyone in my family and team. Without their support, especially when I was out of action, this would have been impossible," said Nadal.

"Thanks also to everyone who sent me messages on Twitter and Facebook. They all gave me positive energy for today."

"But I will try my best to have another chance to play in a final and win a Grand Slam. This tournament is very special to me."

Ferrer had raced through the first game to love, but it was the champion who broke first for 2-1 when his compatriot unleashed a wild forehand.

Ferrer, showing all the attributes which gave the nickname of 'bloodhound', was level in the next game at 2-2 and with both sluggers evenly matched, it was going to take something out of the top drawer to settle the opening set.

Nadal produced it right on cue, flashing a superbly controlled, sliding backhand on the move, from 10 metres behind the baseline, past the advancing Ferrer.

Nadal backed it up in the ninth game when a double fault from Ferrer handed him a set point which translated into the a first-set advantage when the veteran dumped a weak backhand into the net.

Ferrer hadn't dropped a set in the tournament and had spent six hours fewer on court getting to his maiden final.

But he was in serious trouble and he knew it, suddenly confronted by Nadal's record of 145 wins against just three losses when he had won the first set of a Grand Slam match.

Their personal history was also stacked against him with just four wins against 19 defeats coming into Sunday's final.

Sixteen of those losses were on clay and Ferrer's only victory on the surface was way back in 2004 in the pair's first meeting when Nadal was still a raw 16-year-old.

In no time at all, and with light drizzle falling, the champion was 3-0 ahead in the second set as a love-service game backed up a break which had been secured with a pair of sharp forehands.

Ferrer halted Nadal's six-game streak for 3-1 but was unable to convert four break points of his own in the fifth game, a marathon duel which included a 29-shot rally.

Nadal was 5-1 up and preparing to serve for the second set when a spectator, naked from the waist up, leapt from the stands carrying a flare just feet from where Nadal was standing.

The intruder, with the words 'Childrens rights' written across his chest, was wrestled away from the court.

The final had already been held up by protesters high up in the stands holding up placards demonstrating against France's same sex marriage law.

Nadal was broken but it made little difference to the outcome.

He hit back for 5-3 on Ferrer's fifth double fault and wrote his name into history when he unleashed another crosscourt winner.