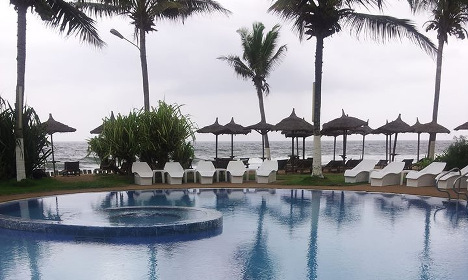 The assailants, who were “heavily armed and wearing balaclavas, fired at guests at the L’Etoile du Sud (Southern Star), a large hotel which was full of expats in the current heatwave,” a witness told AFP.

It was not immediately known how many people had been killed or injured or who was behind the shooting in the resort, a former French colonial capital around 40 kilometres (25 miles) east of the commercial hub Abidjan.

Radio France Internationale quotes a military official as saying five people were killed, but other reports put the death toll as high as 12.

Another witness said there had been casualties, without being able to say how many.

“The shots took us by surprise and now we are staying holed up,” the witness said.

A crowd of several hundred people had gathered at the entrance to Grand-Bassam’s French quarter at the edge of the old town, where a dozen ambulances were on standby.

An AFP journalist saw around a dozen people, including an injured Western woman, being evacuated in a military truck.

Military vehicles carrying heavy machine guns were also heading to the scene, along with armed traditional hunters known as Dozo.

Attacks in recent months on luxury hotels in the capitals of neighbouring Mali and Burkina Faso have left dozens of people dead, leaving West African nations scrambling to boost security in the face of a growing jihadist threat.

Analysts have voiced fears that Islamist attacks could spread to countries such as Côte d'Ivoire and Senegal, and the region’s US-led Flintlock military exercises that wrapped up recently focused on the need to counter jihadism.

In Burkina Faso and Mali, Al-Qaeda in the Islamic Maghreb (AQIM) claimed responsibility for deadly attacks on hotels popular with foreigners in November 2015 and in January this year.

The Mali attack in November left 20 people dead, while gunmen killed 30 people in the assault on a top hotel in Burkina Faso’s capital Ouagadougou in January.

Home to some 80,000 people, Grand-Bassam holds UNESCO World Heritage status thanks to its elegant colonial-era facades. The town has several hotels frequented by expats.

UNESCO describes Grand-Bassam as a late 19th and early 20th century colonial town that “bears witness to the complex social relations between Europeans and Africans, and to the subsequent independence movement”.

“As a vibrant centre of the territory of French trading posts in the Gulf of Guinea, which preceded modern Cote d’Ivoire, it attracted populations from all parts of Africa, Europe and the Mediterranean Levant,” the UN cultural agency says on its website.