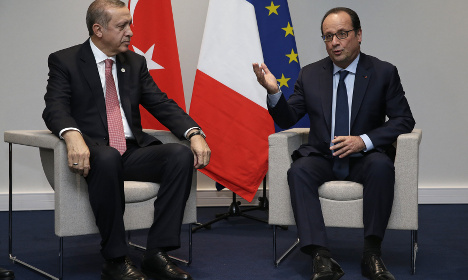 “There cannot be any concessions on the matter of human rights or the criteria for visa liberalisation,” Hollande told reporters ahead of the resumption next week of tough negotiations between Turkey and the EU in Brussels.

Under a controversial draft deal reached this week, Turkey would take back all migrants landing in Greece in a bid to reduce their incentive to pay people smugglers for dangerous crossings to the Greek islands in rickety boats.

In return for every Syrian sent back from Greece, the EU would resettle one Syrian refugee from camps in Turkey — which is hosting about 2.7 million people who have fled the conflict across the border.

Turkey is also demanding €6 billion ($6.6 billion) in aid, visa-free access for its nationals within Europe's passport-free Schengen zone and for swifter action to process its bid to join the EU.

The plan to expel migrants en masse from Greece has sparked international criticism, with the UN's top officials on refugees and human rights questioning whether it would be legal.

Officials have also expressed concern over the potential need for compromise with Ankara, as fears grow over freedom of expression and rights abuses under the rule of Turkish President Recep Tayyip Erdogan.

Hollande spoke after meeting in Paris on Saturday with more than a dozen social democrat leaders from the EU, including Italian Prime Minister Matteo Renzi and German Vice-Chancellor Sigmar Gabriel.