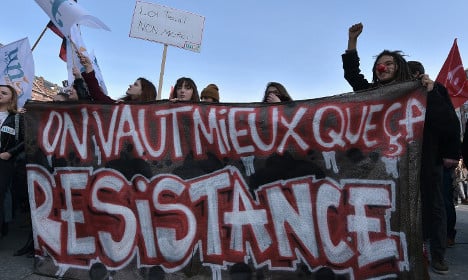 If there was ever a day to experience France at its best or worst (delete as appropriate) it was Wednesday. If you wanted any proof that life in France was at last getting back to normal after the devastating terror attacks then this was it.

Train services were crippled around the country due to (yet another) defiant / irritating strike over pay and conditions. Students and high school pupils showed the Gallic appetite for protest lives on by blocking schools with dustbins and marching through the streets, clenched fists raised above their heads.

The students’ beef was with the controversial raft of labour reforms being proposed by the Socialist government – of all people – that they claim will harm their futures.

The bill is aimed at cutting the record unemployment by introducing more flexible working arrangements and overtime and making it easier for businesses to hire and fire staff, in a country where workers have a reputation for being almost unsackable.

Despite facing a youth unemployment rate of 25 percent, those young French people who took to the streets are clearly not happy with the government’s attempts to fix it.

“We are worth more than that,” was one of their slogans.

They are, of course, backed by trade unions. Not just radical leftist unions but also more reformist unions like the CFDT, who are demanding the reforms be drawn up again. The ever-unpopular President François Hollande has already wobbled in agreeing to delay the bill and backers of the reforms fear Hollande may buckle, leaving France to suffer once again due to its apparent inability to get with the times.

Veteran French politician François Bayrou, a centrist, summed up the frustration of many.

“Is France going to remain the country of blockages, the country of neverending deadlock, where every time a proposal is put forward the country says “NO” and takes to the streets to block it?” said Bayrou.

He criticised the government and particularly Hollande for not doing enough to explain the reforms to a public already fearful about loss of job security and trade unions baying for the blood of a government they feel has already betrayed them.

So what’s actually proposed by these reforms?

Essentially the changes are aimed at freeing up the labour market with the theory being it will be easier for companies to hire workers if it becomes easier to fire them when times are hard.

For example the rules around when workers can be laid off are to be relaxed so companies suffering losses or needing to “reorganize to save the company” can be let go.

The reforms aim to bring in more binding referendums for workers when unions fail to reach an agreement.

One particularly unpopular article in the bill will see French subsidiaries able to lay off workers in hard times, even if the mothership multinational company is in rude health. (Bins block an entrance to a school in France on Wednesday. AFP)

Another highly unpopular move is to limit compensation pay-outs for workers found to have been unfairly sacked – a move aimed at helping small and medium companies.

Companies will be allowed to sack staff if they refuse to adapt to a change in working hours if the company expands or is in difficulty. Agreements on overtime will be sorted out between employees and bosses rather than at sector level as is often the case at the moment.

What’s worse for them is they are being pushed through by a Socialist government most of them helped into power.

“To those on the far-left, these reforms are worse than Satan,” said France-based economist Tomasz Michalski, who described the labour bill as “useful” and “important”.

'Have we tried everything?'

But the under-pressure government and organisations representing businesses insist something must be done to boost the competitiveness of French companies struggling to adapt to globalisation.

“The worst thing to do would be to keep the status quo,” said PM Manuel Valls who is the driving force behind the reforms.

Economy Minister Emmanuel Macron pleaded: “Have we tried everything? Let us look outside France. What has happened elsewhere? They have all evolved, they have all done things,” he said. Even Italian Prime Minister Matteo Renzi, who carried out similar labour reforms, weighed into the row saying the French “should not be scared of change”.

But things are not as simple in France where left wing unions have a deep distrust – let’s just call it hatred – of big business, or the “patronat” as they are called in French.

They believe companies could quite easily hire more workers but instead just want to concentrate on maximising their profits. They mock the government’s notion that making it easier to sack workers will actually bring down unemployment.

But despite all the protests and arguing, most people in France agree something needs to be done. While an opinion poll said seven out of ten were against the reforms, another showed that 63 percent agreed France's 3,600 page labour code acted as a break on employment.

Economist Michalski, from HEC business school near Paris, believes France isn’t quite at deadlock as Bayrou would suggest and believes the reforms in some version or another will get through parliament.

“France is the last major EU country that hasn’t carried out major labour reforms,” said Michalski. “France was blocked for a very long time, but things are slowly starting to move.”

It’s doubtful they will move quickly enough to save Hollande’s presidency and these labour reforms could be his parting “gift” to the nation before he is booted out of the Elysée next year.

Whether or not they are a gift to France, only time will tell. 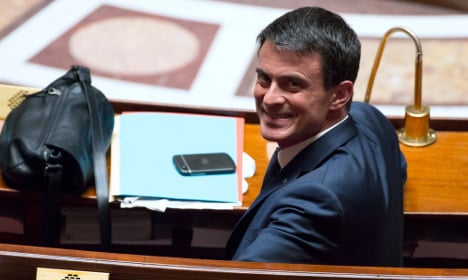