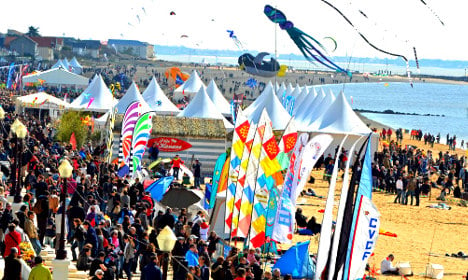 Now in its 74th year, the 1,290km cycle race between Paris and Nice is also known as the Race to the Sun, due to the start in Paris, where March is often cold and windy, before finishing in the sunny south of the country. It covers seven gruelling stages of varying terrains – you can view the route here. Run by the same company that organizes the Tour de France, it is a great chance to see some of the world’s top cyclists in action – whether you choose to cheer them on from the side of the road, or the comfort of your sofa.

This is the first of the region’s festivals this year, taking place over Easter weekend, and despite what the name suggests, there will be far more than just kites on show. The busy schedule (which you can see here) includes demonstrations, shows and workshops in aerial ballet, kite-surfing, kite-jumping and other windborne sports. There will even be an Easter Egg hunt and a daily ‘Sweets Drop’ to entice the less sporty members of the family.

Taking place in Morlaix, this festival celebrates a range of music with a focus on electro, and gets bigger each year with a mix of bigger names and up-and-coming groups.

The concerts are held in a range of venues from the intimate to the large, with the annual swimming pool concert as the highlight.

Plenty of Parisians are guilty of rarely venturing out of the city centre but this jazz festival could be the event to tempt you into the suburbs.

With concerts in different venues and everything from big bands to solo artists, it's suitable for jazz fanatics and music fans in general. A €20 pass will get you entry to four concerts.

If you’re struggling with French and tired of being constantly corrected on your pronunciation, this celebration of Italian cinema might be a welcome break. Eight films will have their premiere at the festival, and there will also be screenings of old favourites and little-known gems.

Held a month after the city’s official carnival, this ‘women’s carnival’ has its origins in the older tradition of a mid-Lent Washerwomen's Carnival. The city's hard-working laundrywomen would take to the streets, dressed up, and elect a 'queen' before continuing the festivities into the night.

This year, women will parade through the streets (see the route here) and ‘queens’ will be crowned. Men are welcomed too, but are encouraged to dress up as women.

Things don't get much more French than this gastronomic spectacular. Over 350 cheese and wine experts will be at the show to display and sell local produce, and farm animals will also be on show.

As well as the stalls, there will also be an elaborate dinner on the Saturday, followed by a dance. The region's 'best brie' will be crowned, and spectators can join in games and competitions too, such as guessing the weight of cows.

'Comedy is a serious matter' is the motto of this festival, where comedy films from all over the world will have their premiere and compete for the title of Best Comedy of 2016. Find information about getting tickets here.

This annual fair takes place for the 100th time this year and 100,000 visitors are expected. Bargain hunters will be in their element as the fair is devoted to flea markets, antiques and vintage – the entire town will be transformed into a marketplace, with four distinct areas each devoted to one of the following categories: antiques, old books, contemporary art, design and decor. There will also be experts on hand to confirm the authenticity and value of objects on display.

FESTIVAL
France’s Fête de la musique ‘will go ahead, with masks and a curfew’
Url copied to clipboard!