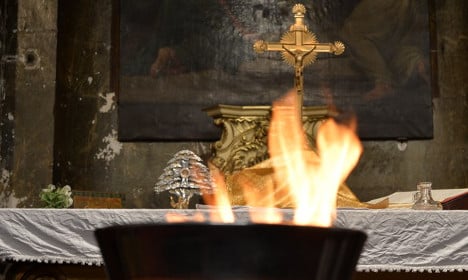 An octogenarian with anti-clerical views and his recently baptized neighbour have been arrested in a Paris suburb
after thousands of stolen church artefacts were found in their homes, police and a priest said Monday.

The pair were picked up after the detective work of one cleric who correctly predicted when they would return to his church for more plunder.

In all more than 3,000 religious objects – including crosses, statues, candles and rosary beads – were recovered from the homes of the elderly man and the neighbour, a woman in her 60's, in the southern suburb of Bagneux during a search late last week.

“At the home of the octogenarian, the toilets were absolutely full of crucifixes, there wasn't so much as a square centimetre of space,” said Ludovic Serre, a priest whose parish to the west of Paris was among those targeted.

He has now managed to recover some of the lost items.

Serre spoke of the frequent disappearance of objects from his Notre-Dame-de-Lourdes church in Chaville since last November.

“As soon as I put a cross out on the altar of confession, it would disappear,” he said, adding that when the crib was taken from the Christmas nativity display in December “it was too much and I filed a complaint”.

Police said that other religious buildings had been targeted by the same criminals over several weeks, with everything from cheap candles to old Russian icons disappearing, with the total worth of the ill-gotten gains put at around €10,000 ($11,000).

Serre, whose church is now protected by a video surveillance system, said the robbers appeared to have a quite precise method of operating, arriving “every four or five weeks, on Sundays between 4-4:30 pm.”

“I told the police that, according to my calculations, they should return on February 21. And they did! Although half an hour early,” he added.

The investigators then followed the two suspects to their homes where they were quickly arrested.

The police had expected that the church thieves would be youngsters, the priest said.

“In fact they found an 80-year-old… a revolutionary who believes that church property should be taken away” and a woman in her sixties who “had recently been baptized.”

The pair of suspects have been freed pending trial.