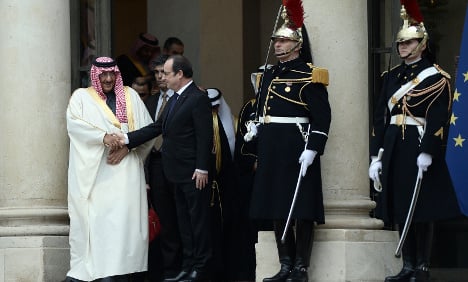 The office had released no statement on the visit, which took place on Friday, but it was reported by the Saudi news agency SPA, which said Nayef was cited for his “efforts in the fight against terrorism and extremism”.

But news of the bestowal of the Legion d'Honneur on Nayef sparked harsh criticism on social media from opponents to the death penalty, many tweeting using the hashtag “#honte” (#shame) and pointing to Saudi Arabia's use of capital punishment, and poor record on women's and LGBT rights.


A Hollande aide said Nayef, who is the Saudi interior minister, received the honour as a “foreign individual, a common protocol practice”, noting that Hollande himself received Saudi Arabia's top honour during one of his visits there.

“It's a diplomatic tradition and I could tell you about many Legions d'Honneur that have been given,” Jean-Marc Ayrault, the newly appointed foreign minister, told France Inter radio – though Le Parisien noted that he appeared to stumble over his words, starting to say “démocratique” (democratic) before quickly switching to “diplomatique“. There was “nothing grandiose” about the ceremony, said Ayrault, adding that he could understand the negative reactions to the act.

President Francois Hollande awarded the honour to Nayef, who is also Saudi interior minister, during a visit on Friday for his “efforts in the fight against terrorism and extremism”.

Nayef is widely respected throughout the West for his efforts to combat violent extremism.

He led a crackdown on Al-Qaeda which waged a campaign of shootings and bombings against foreigners and Saudi security personnel in the kingdom between 2003 and 2007 France has sold billions of euros worth of weapons to Riyadh, and sees Saudi Arabia as crucial to intelligence sharing about jihadist groups

But critics point out that Saudi Arabia has spent decades funding the spread of its hardline Wahhabist teachings across the world, which is widely seen as underpinning the very jihadist threat that France is trying to defeat.

Bin Nayef was announced as crown prince and heir by King Salman last year – a move which passed over the king's half-brother. He is also the kingdom's Interior Minister and has met with British Prime Minister David Cameron and US President Barack Obama to discuss security issues.

Saudi Arabia on Sunday carried out its 70th execution so far this year, beheading a man convicted of murder. On January 2nd, 47 were executed for “terrorism”, including Shiite cleric Nimr al-Nimr, a driving force behind protests that began in 2011 among the kingdom's minority Shiites.

The anger over the Legion d'Honneur comes after last summer's “beachgate” scandal when French authorities were lambasted for privatising a Riviera beach for the exclusive use of the Saudi Royal family during their holiday in France. A regional councilor took the matter a step further and launched a petition against the privatization of the beach, gaining over 50,000 signatures of support.