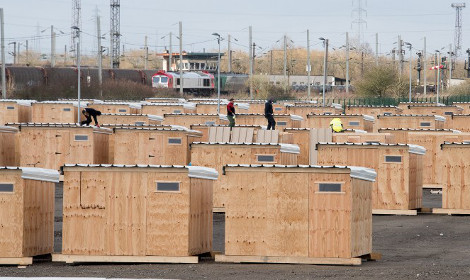 If the Jungle refugee camp in Calais was described as the “worst in Europe” the one up the road at the Grande Synthe near Dunkirk, was said to be even worse.

The camp, located in woodland outside the port of Dunkirk, was home to over 1,000 mainly Iraqi-Kurd refugees, who eked out an existence amid the mud and miserable conditions.

Up until now they had to make do with tents or ramshackle huts, much to the anger of international aid groups who lined up to blast the French government for allowing refugees to live in worse conditions from those which they had fled (pics below). But on Monday the town of Grande-Synthe opened France's first-ever refugee camp to meet international humanitarian standards, despite official opposition from the government.

“It's a great day for human solidarity,” said local mayor Damien Careme, who fought a battle with the authorities.

“I've overcome a failure of the state,” he said, adding that he could no longer stand the sight of around 75 children living in the original camp.

Cordet had “ordered the mayor of Grande-Synthe to immediately cancel the municipal bylaw” which authorised the opening of the camp against the advice of the municipal safety commission, he said in a statement.

He ordered Careme to “without delay take measures to ensure the safety of the occupants, especially at night” to limit the risk of fire.

“The safety of people is at stake and one cannot disregard the rules, whatever the humanitarian motives,” Cordet said.

Three families of Iraqi Kurds were the first to arrive at the new camp after being moved from the squalid camp nearby.

Doctors Without Borders (MSF) has so far built a little over 200 of 275 planned cabins at the site to house at least 1,500 people — many of whom are fleeing the demolition in Calais.

MSF say they eventually hope to house 2,500 refugees in 375 cabins. The camp also has proper showers and toilets.

According to Le Point news site, it was built at a cost of €3.1 million and will be run by the charity Utopia.56. The town is hoping that the government will agree to foot the bill. The move has frustrated the government which has been trying to move refugees away from the northern coast and into centres where their movement is more controlled.

The government's representative in northern France, Jean-Francois Cordet, said last month: “The government's policy is not to reconstitute a camp at Grande-Synthe, but to make it go away.”