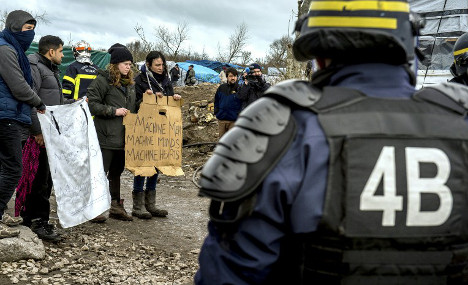 As the demolition continued in the southern half of the camp, where thousands of migrants have gathered in the hope of smuggling their way to Britain, the French government has accused the “violent and extremist” No Borders group of spearheading resistance. But distinguishing its members from the many volunteers and aid workers in the camp was often difficult.

Were these mysterious radicals among the dozens of Europeans standing alongside Kurdish and Iranian refugees as they tried to block the bulldozers from destroying the Hashram Kitchen, one of the main food distribution centres? It was hard to tell.

“If they're here, none of them will talk to the press, that's one of their key rules,” said Maya, who works with the charity Auberge des Migrants.

She said they certainly had a more “revolutionary” air than the charities working in the camp, and were more willing to confront the police, but the image of violent hooligans presented in some parts of the French and British press was greatly exaggerated. Anarchists, anti-globalists, agitators: these are only some of the words used to describe the group by politicians.

Several thousand migrants are living in makeshift shelters on the outskirts of the northern French port city, hoping to sneak across the Channel and claim asylum in Britain.

The camp has also attracted an ever-changing cast of volunteers from Britain, all trying to help, but often arriving with different ideas about how to protest the grim conditions in the Jungle. The most notorious are No Borders. But aid workers who know the inner workings of the Jungle agreed there were barely a dozen No Borders activists – a far cry from the hundreds sometimes reported by the press or authorities.

“They've done lots of good things in Calais, like opening a squat for women. They are useful, talk a lot to the migrants, especially on political questions,” said Maya.

Around the Hashram Kitchen, the atmosphere was more “peace and love” than violent thuggery – most had the air of earnest students or ageing hippies, all dreadlocks and beanie hats.

“They can be a real pain, too – doing things their own way. But their influence on the camp is minimal,” Maya said.

Tom Radcliffe, a British volunteer who helped establish Help Refugees and has been living in one of the shacks cleared away this week, dismissed the idea that No Borders is a dangerous source of disorder as “absolute nonsense”.

“They are not sinister- they're kids,” he said. “They sometimes do some rather foolish things, giving people inaccurate information. They can be immature because many of them are very young and haven't seen what happens when things go bad.”

No Borders began in 1999, according to its website, and claims to fight against borders and immigration controls saying “we believe in freedom of movement for all”. Calais is only one of their causes.

The group says the idea that the Jungle residents cannot organize themselves and need white activists from No Borders is “profoundly racist”. “There is a very strong movement which is entirely led by the migrants,” they wrote on their website.

For many, the biggest problem was the myth surrounding No Borders.

“They have built up their own mythology, and the pro-migrant organizations sometimes use them for cover,” said one charity worker who did not give his name. He said authorities use them as a scapegoat.

Another aid worker estimated there were around 15 “pure and hardcore” No Borders activists onsite, mostly  British women from relatively privileged backgrounds.

They have been known to push the migrants to forcefully resist actions by the police and organize protests in the town, he added. “On at least two occasions, No Borders provoked hundreds of migrants to protest at the port or the train station, telling them that the police presence had been reduced.”

Some of the more senior migrant community leaders are wary of the activists, fearing that the group is using them to advance a political agenda.

“They have the support of quite a lot of the migrants, but not the leaders of the migrant communities, who have understood their game,” said the aid worker.

Their influence could be seen on Thursday, when a group of Iranians emerged from the information centre with their mouths stitched shut in silent protest at the eviction.

It was a powerful way to draw the attention of the world's media, and no one was able to say whether it was the work of the refugees themselves or a group working behind the scenes.