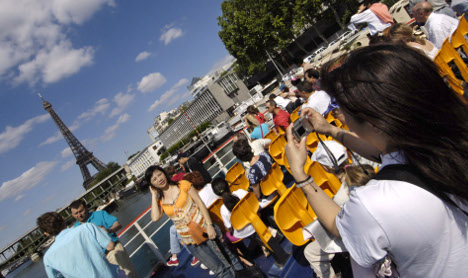 Photo: AFP
It's been three and a half months since 130 people were killed in Paris terror attacks, and France is still trying to reassure foreigners that the country is safe to visit.
While life goes on pretty much as normal for those in France, the tourists are still shying away, with Paris hotels noting drops in bookings of up to 20 percent.
But perhaps not for long. France's newly appointed Foreign Minister Jean-Marc Ayrault announced plans on Tuesday for a new campaign to regain tourists' trust in Paris.
“It's not a campaign with billboards,” he said, reported BFM TV.
“But rather a campaign on social media networks to explain the advantages of France and why people should visit – and stay.”
The campaign will target foreigners via bloggers and foreign websites, but also through the France.fr website.
The plan comes at a cost of €2.5 million, of which €1.5 million will be put in by tourism professionals such as airlines, booking platforms, and tour operators.

France has been working hard with questions of tourism since, cutting visa waiting times for Chinese tourists and inviting Japanese and Chinese tour guides to Paris to reassure them of any security concerns.
Meanwhile, Paris Mayor Anne Hidalgo has been in Tokyo urging the Japanese to visit the French capital.
“You have to come back to France,” she said on Monday, reported the Nouvel Obs newspaper.
“Come to Paris, we have suffered, of course, but now we are living, working, going out.”
“You can find the threat of terror in every city in the world, but we have ensured security on public transport and at the tourist sites.”
Paris officials launched a #ParisWeLoveYou campaign in December in the hope of putting the gloss back on the City of Light’s global image.
Ayrault said his goal was to have 100 million annual visitors to France by 2020. Around 84 million visited in 2015.
The tourism industry is huge for France, employing 1.2 million people and making up 7.4 percent of GDP.