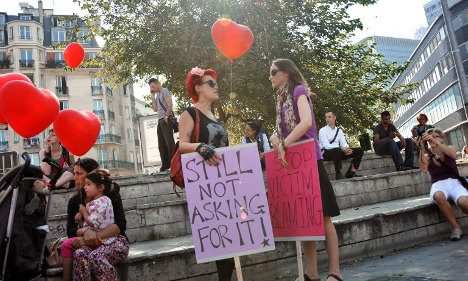 Women taking part in a Paris "slutwalk" with placards reading "Stop victim blaming" (R) and "Still not asking for it" (L). File photo: AFP
'The campaign group Mémoire traumatique and victimologie spoke to 1,001 people over the age 18 in a study about rape released on Wednesday.
It found that almost four out of ten French people think a flirty woman should be blamed, or at least partly blamed, if the victim ends up being raped or sexually assaulted.
Some 27 percent said the same if the woman was wearing “sexy” clothes at the time, such as short skirts or low-cut tops.
Meanwhile, two out of ten respondents said that a “no” can “often mean yes”, and almost a third of 18-24-year-olds said that they thought women can “enjoy” being forced during sex.
The head of the campaign group, Muriel Salmona, said that too often, “the victim is blamed” and that the issue needs to be taken more seriously.
“What we need is a strong political will,” she told France Info.
“We cannot leave victims without protection and care, the traumatic consequences are very serious indeed.”
The actual definition of rape also proved to be a point of misunderstanding among those surveyed.
While the vast majority of respondents (96 percent) understood that rape was “forcing someone into sex”, a worrying amount weren't clear about the exact definition.
France's definition of “rape” (viol) varies from some other western countries, with the penal code stating that it is an assault that includes “any act of sexual penetration” against the victim's will.
In the UK, for example, the definition of rape is slightly more specific and a man is guilty of the crime if he sexually penetrates a woman using his penis.
Wednesday's study showed that 24 percent of the French considered forced oral sex to be a sexual assault rather than a rape, and 15 percent considered penetration with a digit to be assault rather than rape.
A further 28 percent said it wasn't rape if the victim was too inebriated to refuse.
Rape statistics in France have proved to be on the rise lately. An August study found that an act of sexual assault or rape is reported to police every forty minutes in France.
The statistics, gathered by the ONDRP observatory, showed that there were 12,700 sexual assaults reported in France in 2014 – a leap of 18 percent since a similar survey in 2010.
In Paris alone, there were a total of 600 reported sexual assaults and rapes in 2014.
“The only positive thing that these stats show is that more women than before are coming forward to police to report sexual assault,” Clair Serrecombe, spokeswoman for women's rights group Osez le Feminisme, told The Local at the time.
“But given the extent of the problem there is a real lack of willingness on the part of public powers to lead a real campaign to tackle rape,” she said.
SEE ALSO: France unveils plan to cut sexual assault