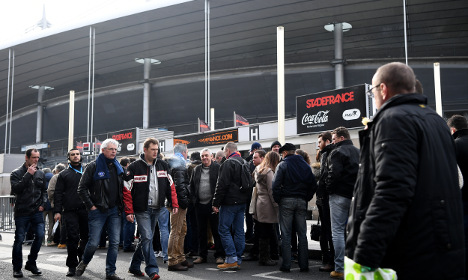 Football fans at the Stade de France. Photo: AFP
Fan zones in the ten host cities are feared to be a special target and millions of dollars are being spent on security precautions for the 24-nation football spectacular which runs from June 10th to July 10th.
Up to 80,000 fans have been predicted for the Prado beach venue in Marseille, 60,000 at the Place des Quinconces in Bordeaux and 10,000 in a park next to Nice's landmark Promenade des Anglais. All could be a target.
France has been on high alert since the November 13th attacks by Islamist militants in Paris which left 130 dead. With seven million people predicted to visit France during Euro 2016, security is a big worry.
“Given the terrorist context, these fan zones are a sensitive topic,” Gerard Gavory, the government's security prefect for the Rhone region, told AFP. The Rhone includes Lyon which will host six games including a semi-final.
Matches are also being held in Paris, Bordeaux, Lens, Lille, Marseille, Nice, Saint Etienne and Toulouse.
Key matches, including the opening game and final, will be at the Stade de France in Saint Denis, just outside Paris, which was one of the targets of the murderous November 13 attacks.
Toulouse and Saint Etienne council's had both wanted to cancel the fan zones after the attacks, but have since softened their stance.
Security will be easier to organise in the fan zones, said Fabienne Soulas, the Saint Denis town official in charge of Euro 2016 organisation.
“Otherwise there will be gatherings all over the place, in cafes, and it will not be easy for the police.”
In the post-attack organisation, the fan zones will be sealed off with body searches at entrances, video surveillance, no bags and private guards patrolling inside.
Saint Denis had planned to set up a fan zone opposite its 872-year-old basilica where most of France's kings are buried. But Islamic State has forced a brutal rethink.
Fans' feelgood factor
“As it had to be sealed off, it would have meant blocking off the whole town centre. The police wanted to check the residents of local buildings to make sure there were no suspects,” said Soulas.
Toulouse has also had to change its fan zone site away from its central Place du Capitole.
Saint Etienne is still demanding UEFA pay the cost of all the security, But Europe's governing body, the main organisers, is only paying to guard stadiums, team camps and official hotels.
Bordeaux's mayor Alain Juppe has estimated that his city will pay €4million ($4.3 million) for the fan zone and a quarter will go on security.
Toulouse estimates it will pay €500,000 on security and is looking for sponsors to help pay the cost.
A joint UEFA, French government and host cities committee is to agree the share of the cost at a meeting on March 22. Cities are looking to put the pressure on the French state and UEFA.
Security is not the only reason that the government wants Euro 2016 to be a success — with the host nation doing as well as possible. President Francois Hollande is trying to buildup some feelgood feeling in the country before next year's presidential election.
France's 1998 World Cup win on home territory did wonders for President Jacques Chirac's public standing.
But the French team is dogged by scandal after star striker Karim Benzema was charged with complicity in a sex-tape blackmail attempt against teammate Mathieu Valbuena.
French federation president Noel Le Graet said Tuesday that Benzema would still not be allowed back into the national team even though his bail conditions have been eased.
While not playing for France, Benzema has scored 23 goals in 24 matches for Real Madrid. The form of Valbuena, who can play for France, has slumped.
By Paul Ricard