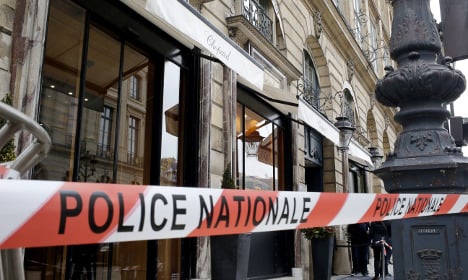 Photo: AFP
The raiders hit the branch of Swiss-based luxury jewellery chain Chopard on the city's Place Vendome — just a stone's throw from the justice ministry.
The Place Vendome is one of the most heavily secured areas in Paris following a spate of raids on upmarket stores and the November jihadist attacks.
“Two individuals were seen with an automatic pistol and at least one grenade,” said a police source.
Police said pair, both men thought to be aged roughly 25 and 40, fled the scene on foot with their haul.
The value of the theft was not immediately known.
A counter and display window at the store was stripped bare in the lightning raid which Jean-Michel Huguet of the Alliance police union said lasted between five and ten minutes.
“The first individual produced a firearm and then a second individual entered. He then produced a grenade,” Huguet said.
One police source said that a patrol car usually stationed in Place Vendome was dealing with a fire nearby.
In December robbers targeted another branch of Chopard close to the Elysee presidential palace.
In 2014 there were several spectacular armed raids on the Place Vendome in which jewels worth between €420,000 ($450,000) and €2 million ($2.2 million) were seized.