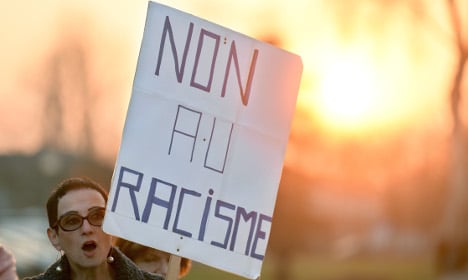 In its fifth report on France, the Council of Europe's Commission against Racism and Intolerance (ECRI), expressed renewed concern around the rise of racist hate speech and intolerance.

In particularly the Commission, which acts as a human rights monitoring body, pointed to how racist speech and outbursts have become all too routine among politicians and other public figures.

The Council of Europe’s Secretary General Thorbjorn Jagland said: “Hate speech has become commonplace in the public sphere” and “remains a matter of concern”.

“I call on political leaders in particular to refrain from making comments which stigmatise already vulnerable groups and fuel tensions in French society,” said Jagland.

The report, which comes amid a huge rise in Islamophobic and anti-Semitic attacks, pointed the finger at those French politicians whose political discourse has been used to target both Roma and Muslim communities.

Even the current Prime Minister Manuel Valls was reprimanded for his comments made in March 2013 about Roma people having “no interest in integrating in France”.

French Mayor and MP Gilles Bourdouleix was also pulled up for his comments about Roma made in July 2013, when he was recorded saying “Hitler didn’t kill enough”.

National Front leader Marine Le Pen was singled out for picking on Muslims, particularly with her rants against the distribution of halal meat and comparing Muslims praying in the streets to the Nazi occupation.

And Nicolas Sarkozy’s Republicains party were chastised for hosting its “conference on Islam” last year, which was boycotted by many Muslim groups.

And there was the infamous recent case of MEP Nadine Morano repeatedly insisting “France was a country of white race.”

“ECRI is concerned about this situation, which is helping to trivialise the stigmatisation of these vulnerable groups,” the report read.

SEE ALSO: The most outrageous comments by French politicians The Commission also blasted French politicians who “adopt a narrow conception of secularity and come up with proposals perceived as giving rise to discrimination,” notably French mayors and MPs who have called for “pork or nothing” menus for pupils in schools.

The report is just the latest in a long line of independent surveys that have highlighted the rise of racism in France.

Last February Council of Europe’s Commissioner for Human Rights Nils Muznieks issued a report that concluded the French were becoming more and more racist and urgent action was needed.

And in April last year a group of UN experts also condemned the “trivialisation” of hate speech in France and the general treatment of the Roma community.

The ECRI also expressed concern over the high level of under-reporting of racist crime and cuts in budgets earmarked for integration policies.

The body called on the French government to change the law so that racism or homophobia are seen as aggravating circumstances of any ordinary crimes.

*revise school curricula and teacher training programmes to promote a better understanding of issues relating to religion and immigration;
* ensure that no legitimate residence (“domiciliation”) application submitted by members of groups such as Roma is turned down and reduce processing times so that these persons can be given access to basic rights.

There was however some praise for France for having taken steps to act on the Commission’s previous report back in 2010.

It pointed to the government’s 40-point plan unveiled in April last year that was aimed at cracking down on racism and anti-Semitism.

The government set aside €100 million to aid the fight, which included steps to fight online racism and intolerance.

French authorities were also praised for prosecuting the perpetrators of hate crimes.