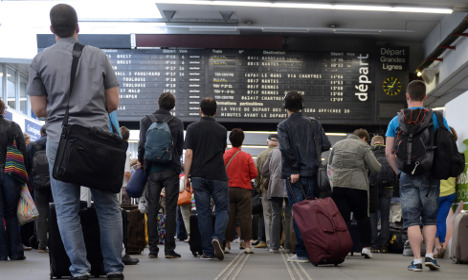 The four unions that represent SNCF workers – CGT, CFDT, Sud and Unsa –  have jointly called for the strike on Wednesday March 9th.

They are demanding more staff are recruited, a rise in salaries and guarantees about improvements in work conditions.

“With this call to strike we are sending a warning shot to the government,” said Didier Aubert from CFDT rail workers.

If the strike goes ahead it would begin on Tuesday March 8th at 7pm and run until 8am on Thursday March 10th.

It is the first time the four unions – normally divided over the questions around rail reform – have joined forces for a protest since June 2013, when only four out of ten trains were running. Rail workers block the tracks during a 2014 rail strike in France. AFP

“The glaring lack of responses to our requests and the uncertainty you place on the future of all rail workers has forced us to act,” said a statement from the unions to rail chiefs.

They denounce SNCF’s “catastrophic” management of the rail network which they say has seen train services taken away due to staff shortages.

They want a general wage increase and are demanding more “social guarantees” are included in the common job regulations that are currently being discussed by government and businesses.

And commuters and travellers in Paris are unlikely to be spared the travel disruption with unions also calling on transport staff in the French capital to join the strike.