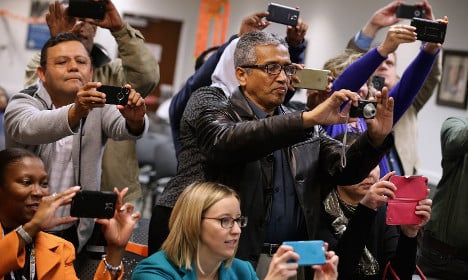 Facebook users in France may soon be able to breathe a sigh of relief – at least those who aren’t proud parents.

“Please stop posting pictures of your kids on Facebook”, is the message being sent out by the French Gendarmerie to parents across the country.

It’s a message that many on Facebook would dearly love to write to some of their own online friends, but don’t have the heart.

But it’s not that France’s national police chiefs are really pulling their hairs out at seeing their Facebook feeds clogged up with up images startled newborns or kids on their first day of school (or at least not officially).

They say they are simply concerned about the security of children, whose photos and names are so often proudly posted online without a second’s thought for the privacy or security of les petits.

The Gendarmerie want parents to think twice about where the photos of little Jean-Pierre of Josephine eating their first ice creams might end up.

On their national Facebook page the Gendarmerie posted an appeal which said: “Protect your children!”

The post calls on parents to be aware of “chain” Facebook posts that say things like: “Are you proud of your children? If so post three pictures of your beautiful children on Facebook and get 10 of your friends to do the same.”

“Well you can be a proud mum and proud dad to your magnificent children, but beware,” reads the post from police.

“Remember that posting pictures of your children on Facebook is not safe. It is important to protect the privacy of minors and their images on social networking sites.”

Some regional Gendarmeries went even further and simply told parents to “STOP!” posting pics and forwarding the chain posts.

Authorities have long feared that images of kids cannot not only end up in the hands of paedophile networks, but also by crime gangs looking to steal their identities.

Once they have a photo of a child, along with a name, date and place of birth, it can make the job of identity thieves’ that much easier.

That’s ignoring the simple fact that little Jean-Pierre might just grow up and regret having been tagged by his maman whilst having his first bath all those years ago.

For their part Facebook are believed to be working on a pop-up alert that would ask parents whether they are sure they want share pictures of their children publicly, rather than to just friends and family.

However a safeguard is not currently in place.

But ultimately it will come down to the individual parent to decide whether or not it is right to post images of their kids on Facebook.

A survey in the US in 2014 found that 97 percent of mums on Facebook had posted a picture of their children and 89 percent post status updates about them.

One move is to limit access of photos to just your friends, ask others (or their parents) for authorisation before posting, avoid “tagging” names to photos as much as possible and don’t put anything intimate online.

Perhaps their most sensible piece of advice is to “take time to reflect” before posting a photo on line.