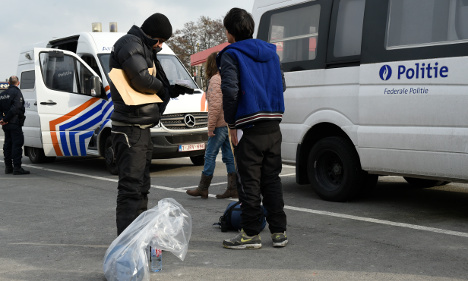 Photo: AFP
In a fresh blow to the EU's Schengen free travel area, Belgium announced the measure last Tuesday to stop migrants currently at Calais crossing into its territory to try to reach Britain from the port of Zeebrugge.
France has called the decision “strange”.
“Since last Tuesday 619 people have been turned back — 334 who were already in Belgian territory and 285 at the border,” Belgian police spokesman Peter de Waele told AFP.
Belgium has deployed around 300 police including officers on horseback to enforce the border controls with France.
France finally began demolishing part of the so-called Jungle on Monday after a series of legal wrangles, sparking clashes between French riot police and migrants.
Seven Schengen countries including Belgium have reinstated border controls to deal with a record flow of migrants and refugees from Syria, Iraq, Afghanistan and other countries.