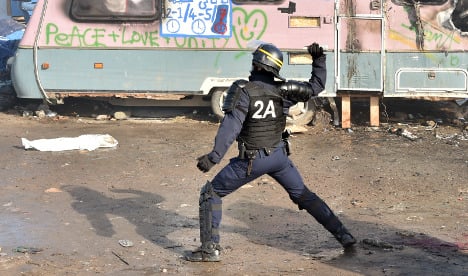 A riot police officer throws a tear gas cannister. All Photos: AFP
Police lobbed tear gas cannisters at migrants who protested as two bulldozers and around 20 workers moved in to start pulling down the shacks, some of which were set ablaze.
At least one migrant and one member of the British “No Borders” activist group were arrested as dozens of riot police were deployed to deal with protesters.
The demolition of the southern half of the camp began after a court petition by charities to stop it was rejected last week. “We didn't think that it would happen with so many police. It's infinitely sad to see the waste of so much work that we've done in the past months,” said Maya Konforti of the Auberge des Migrants charity.
Volunteers and aid workers have spent months trying to improve conditions in the camp, built on a former toxic waste dump on the outskirts of Calais.
“These people want to reach Britain and won't leave. They will end up in even more hardship, particularly in winter,” Konforti said.

Images (below) from the camp showed workers pulling down the makeshift huts under the close watch of police. Buccio said three-quarters of the shacks in the southern half of the camp were now empty after migrants were encouraged to leave in recent days.

Those organizations claim that French authorities have vastly underestimated the numbers of refugees and migrants living in the southern part of the camp and the alternative options lined up for those evicted are insufficient.

While local government chiefs say around 1,000 migrants will be affected by the clearing of part of the camp, groups like Medecins sans Frontieres have told The Local the figure is closer to 3,000.

The migrants and refugees have been given two official options by authorities – either move to an authorized part of the camp where places are still available or be moved to one of the 102 “welcome centres” around France.

However aid groups believe migrants, who are determined to reach the UK, are more likely to opt for a third option which will be to simply set up camp elsewhere in the northern port town.

“Around 500 to 1,000 migrants will just disappear because there is nowhere for them to go,” Michel Janssens from the charity Medecins sans Frontieres told The Local last week.