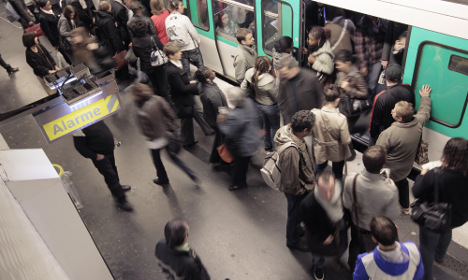 Photo: AFP
The incident occurred at around 11.30am at the Tuileries station in the first arrondissement.
The group threw firecrackers into the train, prompting a mass panic, according to a report from RTL.
It is understood that the youths had planned to rob Metro users in the ensuing panic, although it remains unclear if they were successful.
Police were quick to arrest four young women, adding that two male accomplices managed to escape on foot.
Officers have opened an investigation into “endangering the lives of others”.
Besides the fact that fireworks on a train would be frightening enough, Paris is still on edge after terrorists killed 130 people in coordinated attacks across the city on November 13th.
Firecrackers set off in public places in Paris have caused fear in the past, notably just days after the November attacks, when crowds gathering to pay respects ended up fleeing in blind panic through the streets.
The station where Sunday's incident occurred, Tuileries, is at the edge of the Jardin de Tuileries, a hugely popular park for tourists and Parisians alike. It is on Line 1 of the Paris Metro, which has regular warnings for passengers to be wary of pickpockets.
READ ALSO: How to avoid the Paris Metro pickpockets