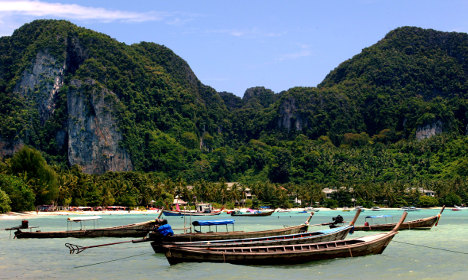 Five Cambodian fishermen have been arrested for a brutal attack on a group of French tourists in which two women were raped at knifepoint on an isolated Thai beach, police said Monday.

It is the latest high profile assault on foreign visitors in Thailand, a country that is hugely reliant on its lucrative tourist trade.

Police said the attackers allegedly swam from their fishing boat to assault the group.

“They (the attackers) all confessed and police have already brought them to do a re-enactment,” he added, referring to a common police technique where the accused replay their crimes for investigators, usually in front of the media.

Thailand's Channel 7 television broadcast images of angry locals trying to attack the men during the re-enactment on Monday.

The alleged assailants have all been charged with rape and violent assault while the victims have been taken to hospital on the mainland.

The French embassy said it had sent officials to be with them.

The December to February period, when the tropical climate is cooler, is peak tourist season.

But a number of grisly and violent crimes against foreigners has sullied the country's reputation as a tourist haven.

In September two Myanmar migrant workers were sentenced to death for the 2013 murder of two British backpackers, one of whom was raped, on the diving island of Koh Tao after a controversial investigation and trial.

Thai authorities insist the two men are guilty. But the defence team believes the pair have been scapegoated by a local police force desperate to get results.

Tourism remains one of the few bright spots in the Thai economy accounting for at least 10 percent of GDP.

The junta-led country posted a lacklustre growth rate of just 2.8 percent last year, one of the lowest in the region with analysts saying much of that growth came from tourism.

Given just how many people visit Thailand, the kingdom remains a relatively safe destination with violent attacks still rare.

Instead it is the less headline-grabbing scourge of traffic accidents that claims far more tourist lives.

In a 2015 study on global road safety the World Health Organization found Thailand had the world's second most dangerous roads with 36.2 fatalities per 100,000 people. Only Libya's road fatality rate was higher.