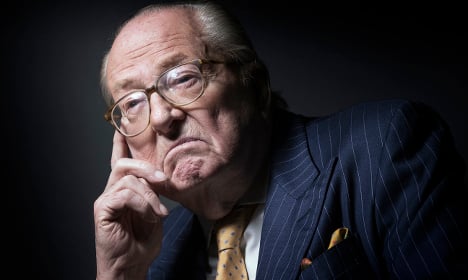 "If I was American I would vote for Donald Trump... may God protect him." Photo: Joel Saget/AFP

“If I was American I would vote for Donald Trump… may God protect him,” tweeted the fiery 87-year-old founder of the National Front, now led by his daughter Marine.

Le Pen was booted out of the party after a bitter feud with his daughter over his continued inflammatory, racist and xenophobic comments while she tries to polish the FN's image to lure voters.

Last year he rehashed familiar comments about Nazi gas chambers being a “detail” of history and said France should get along with Russia to save the “white world”.

He has also in the past declared the races are not equal and said in 2014 that Ebola could clear up Europe's immigration problem “in three months”.

While the elder Le Pen remains a thorn in the side of the National Front, the party has — much like Trump — won increasing support from voters disaffected with the traditional ruling class.

The party drew a record number of votes in December regional polls but failed to win a single region.

Trump's unlikely juggernaut in the US presidential primaries on the back of comments tinged by racism and veering towards demagoguery, has stunned observers and shaken the American political establishment to its core.