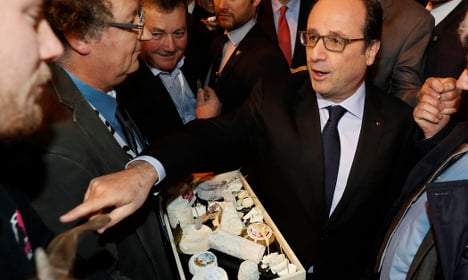 Livestock farmers booed and whistled as Hollande and Agriculture Minister Stephane Le Foll made their way through the vast hall in southern Paris. Photo: Benoit Tessier/AFP

Five members of the main farmers' union FNSEA were arrested after the protesters destroyed the stand's walls and furniture, the union said.

They wanted to “say loud and clear at the stand… that this country's agricultural producers don't feel like citizens,” FNSEA secretary-general Dominique Barreau told AFP.

“That's the exasperation, that's where we are!”

Livestock farmers, some wearing black T-shirts reading “I'm a livestock farmer, I'm dying”, heckled Hollande, calling him “good for nothing” and “manure” who should resign.

One shouted: “He couldn't care less about us.”

“I hear the cries of distress,” said Hollande, who plans to seek re-election in 15 months despite dismal approval ratings. “If I am here today it's to show that there is national solidarity.”

Earlier, livestock farmers booed and whistled as Hollande and Agriculture Minister Stephane Le Foll made their way through the vast hall in southern Paris, walking past a large banner reading: “I am the best in my profession but my passion is no longer enough.”

After months of protests across the country that saw farmers blocking roads with their tractors or dumping manure outside government offices, security was tight outside the venue, but no incidents were reported.

Inside, flag-waving representatives of farmers’ unions were the first to greet the president, who spoke with them for some 20 minutes before going on to admire the fair’s mascot, a Bazadais cow from southwestern France named Cerise (Cherry).

He added: “To come and exhibit in the context of so much difficulty and pain is a lovely act of patriotism. It is not compliments that farmers want but lasting policies.”

And the head of the main farmers union FNSEA, Xavier Beulin, said he would “remind (Hollande) of the depth of the crisis”.

“There is a lot of worry on the farms, a lot of people are quitting (because) they feel there is no future,” Pinatel said, noting that 5,000 farmers are leaving the sector each year.

The beef, pork and milk sectors have seen prices collapse because of declining sales to China and especially the Russian embargo on most Western food imports in retaliation for sanctions over the Ukraine crisis.

In addition, wholesalers, which have been engaged in a price war for several years, are demanding ever deeper cuts from suppliers, who are in turn squeezing farmers.

Meanwhile, a mild winter has upset the apple cart for many growers, who are bringing produce to the market before they can find buyers.

The Salon de l’Agriculture is a must on the calendar of any ambitious politician, and with an election just 15 months away, the glad-handing — and the “stroking of cows’ behinds” made virtually compulsory by the earthy president Jacques Chirac — will be the order of the day.

But FNSEA warned: “It’s out of the question for the fair to become a political beauty contest once again.”

Le Foll — who is also the spokesman for Hollande’s government — said he planned to “be respectful, available and receptive” to the farmers’ concerns.

Nearly 700,000 visitors — a third of them children under 12 — are expected to descend on the vast Porte de Versailles exhibition centre for the nine-day fair.