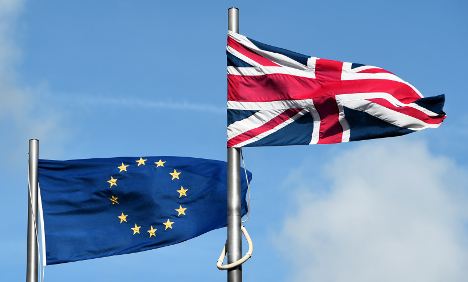 Photo:Damien Meyer/AFP
Christopher Owen is a British expat who has lived in the Charente for 16 years. As part of our series giving a voice to some of the hundreds of thousands of British nationals in France in the run up to the UK's EU referendum, he tells us how the arguments for leaving the Union are based on ignorance.

The EU is an experiment born of the atrocities of two world wars. In general terms, the EU has been a success – of course, as with all large institutions, many improvements could be made.

Great Britain is an important partner and ally in Europe, and common sense dictates that it should play a full role in the alliance of other European states. The problem is that politicians make that relationship complicated and partisan. Ask any citizen of Europe what they want and I would stake my life on the answers being generally similar to this view.

It was political nonsense to stage a referendum. There are very few people who fully understand the real nuts and bolts of the EU.

The arguments for leaving seem to revolve around sovereignty and cost. Conservative MP Michael Gove has just said that “we are not self governing” while in the Union. In that case, it's odd that (former UK Prime Minster) Tony Blair managed to decide to take Great Britain to war in Iraq without any interference from the EU.

If you ask any man in the street what the EU has stopped the UK from doing or made it do against its will, I suspect he would not be able to say. What's more, he would be unaware that the EU has actually improved his protection as a consumer when buying goods, improved working conditions, pay, and so on. Yet he is going to make a confident decision in total ignorance.

The figure often quoted for the annual cost of being a member of the EU always seems to be the gross figure before the rebates and subsidies are deducted. It is still a large figure, about the same as France pays. However, that is not really the point as far as helping folk decide whether to stay in. Many seem to think that leaving the EU would mean that the savings made will be redistributed.

Do we really believe that we shall all be “better off” after we leave? We can't be that stupid can we? No-one can accurately predict the consequences. There is no evidence that it will have a beneficial effect on the UK voter.

Nicolas Sarkozy managed to remove a large section of British citizens living in France from the health system. Almost at a stroke after reinterpreting EU regulations, people found themselves excluded. Iain Duncan-Smith masterminded the recent end to winter fuel allowance to pensioners in France. So, it is patronizing to those who have been around a bit, to say that all will be well and agreements will be renegotiated to look after us. When dealing with politicians of all colours and nationalities, it is wise to maintain a modicum of scepticism.

A referendum is the exercise of personal choice; Cameron has heralded that for his cabinet. It is only reasonable therefore that we all view and assess the possible effects from a personal perspective. I suggest that not one person moving from Great Britain to France or Spain or anywhere else in the EU, thought that there would be a threat to leave the EU and challenge our status here.

We all plan for the future and do our best to “cover all the bases”. Unless one has no financial concerns , perhaps those in luxury in the South, it is not unreasonable to worry about the effects of Great Britain leaving the EU. I suggest that no one can predict the UK governments action on old age pension increases, nor reimbursements to allow pensioners to receive healthcare, in some cases, to maintain life giving treatments for cancer.

I am saddened to see unfeeling, unsympathetic and arrogant comments from fellow expats. Have your own beliefs and political leanings, sure, but it is not helpful to denigrate those who have concerns. If you have no concerns for the future, if the threat of leaving the European Community does not bother you, then you are lucky to be able to be cushioned from the world in which the rest of us have to live.

Send us your views.

In the run up to the Brexit we'll be highlighting how some of the 2.2 million Brits living in the EU are feeling.