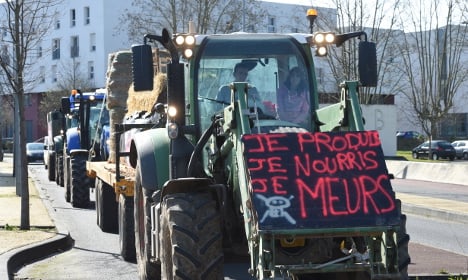 The tractor's sign reads 'I produce, I feed, I am dying'. Photo: AFP

Almost 600 farmers kill themselves each year, according to campaigners within the industry – making it the third most common cause of death for farmers after cancer and heart disease.

But despite the scale of the problem (for context, the rate of suicide among farmers is 20 percent higher than across France as a whole), little has been done to address the difficulties facing the group.

Jacques Jeffredo, a former farmer who studies the phenomenon of farmer suicide, is trying to raise awareness of the problem. He argues that the official estimates, which put the number of annual suicides at around 200, vastly underestimate the reality – partly due to the reluctance of relatives to speak about.

“As long as we see it as an illness, there is a sense of shame and as a result we don’t talk about it,” he said, speaking to BFM TV.

Last October, Jeffredo set up 600 white crosses, similar to those used in military cemeteries, in front of Basilica Saint-Anne d’Auray in Brittany – the region with the highest suicide rate.

“For me it was important, this image,” he told BFM TV. “Numerous anonymous people, who died giving their lives for others, to feed us, to feed the population. They died for that.”

Farmers in Charroux, western France, staged a symbolic march on Friday which concluded in a minute's silence and flowers being left in memory of the dead farmers. More general protests have been rumbling on for months across the country, seeing tractors blocking roads in protest against the lowering of prices which has left many farmers facing economic hardship.

Those affected are increasingly starting to speak out about their experiences to break the taboo about suicide.

One farmer with personal experience of suicidal depression, Louis Ganay, also spoke to BFM TV. “Getting up early every day, knowing that in a month you’ll only be able to make €200 or €300 with 80 hours of work each week, it’s a real torture,” said the 35-year-old, who runs a farm of fifty dairy cows.

When fifteen of his cows died in 2014, Ganay was traumatized and suffered financial hardship which pushed him into depression. “The physical fatigue, the psychological pressure, the bank that wants to give up on you, the death of the cows… I had no reason to live anymore,” he remembered.

Ganay was able to reach an agreement with his bank to spread out his debt repayment, and he also wrote about his problems on the Internet, receiving numerous letters of support, and he is now on the path to recovery.

Francis Le Ferrand, who found her farmer husband dead told France 2: “It's inhumane to work without pay. When you work 70 hours per week and there's no pay at the end, believe me, it is very difficult to live.”

Why does France have such a high suicide rate?