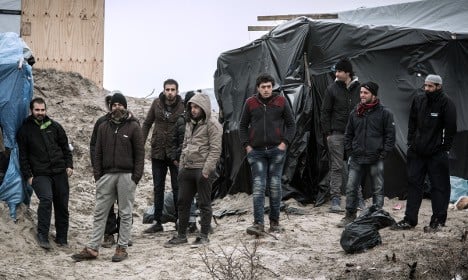 Photo: AFP
Activists working in the slumlike camp had asked the court to stop the evacuation of the southern half of the “Jungle,” with many of the migrants wanting to stay near the entrance to the Channel Tunnel, gateway to their ultimate goal of Britain.
However, Calais town authorities said that no-one will be evacuated from the “Jungle” by force.
“We are going to continue the work undertaken with the (migrants') associations to persuade the migrants to leave so that they have a roof over their heads,” an official, who asked not to be named, told the AFP.
Many charities have slammed the authorities for ordering the eviction without any alternatives lined up. The movement of migrants from the camp has already prompted Belgium to reopen its border checks with France, a move the neighbouring country made on Wednesday.
Since then, border police have already turned back 80 refugees.
Belgian Interior Minister Jan Jambon said most of the migrants currently in Calais eventually wanted to get to Britain and failing that, would use Belgium as a transit route via the port of Zeebrugge.
“We want to avoid at all cost Calais-style tent camps in Belgium. It's a question of keeping order,” said Jambon, adding that authorities wanted to avoid all economic impact on Zeebrugge and on the Belgian coast.
Belgium's response was criticized by French Interior Minister Bernard Cazeneuve on Thursday.
“This decision is a strange one, just as is its motivation,” Cazeneuve said as he arrived for talks with his EU counterparts as the migrant crisis deepens.