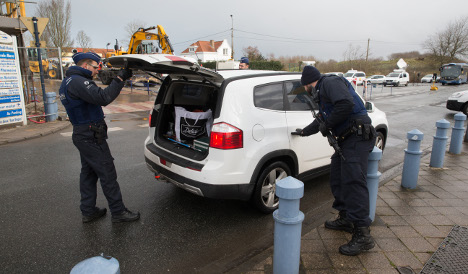 Belgian police at the French border this week. Photo: AFP
A huge operation involving around 300 police officers, a helicopter and mounted police was set up to monitor three border crossings and surrounding sand dunes in the De Panne region bordering France.
“Currently over the past 24 hours we have prevented 80 people, mainly Afghans, from coming into Belgium,” police spokesman Peter Dewaele told a press conference at De Panne.
“A further 25 people — Syrians, Iranians and Afghans — have been intercepted on Belgian territory. After having been interrogated by the Foreigners' Office, they were immediately driven back to the French border.”
But the move was questioned by French Interior Minister Bernard Cazeneuve on Thursday.
“This decision is a strange one, just as is its motivation,” Cazeneuve said as he arrived for talks with his EU counterparts as the migrant crisis deepens.
A French court on Tuesday postponed a ruling on the demolition of half the “Jungle” refugee camp in Calais, a northern French port city near the Channel Tunnel rail link which leads to Britain.
But Belgian Interior Minister Jan Jambon announced on Tuesday that his country was reintroducing border controls with France, becoming the latest to do so in the EU's Schengen passport-free travel area.
Jambon said most of the migrants currently in Calais, a port in northern France, eventually wanted to get to Britain and failing that, would use Belgium as a transit route via the port of Zeebrugge.
“We want to avoid at all cost Calais-style tent camps in Belgium. It's a question of keeping order,” said Jambon, adding that authorities wanted to avoid all economic impact on Zeebrugge and on the Belgian coast.
'People with backpacks'
However a number of migrants have already gathered at Zeebrugge in recent weeks, and Belgian police stepped up patrols there on Wednesday.
Nicholas Paelinck, head of the police in Belgian's western coastal region, said the migrants were trying to travel dozens of miles (kilometres) on “smugglers vehicles” — or by simply taking bus, trains or trams.
On the main road to the French town of Dunkirk, eight miles to the west, two Belgian police checkpoints were set up on each side of the carriageway early on Wednesday, AFP journalists said.
Three police officers stopped each vehicle and inspected trunks and cargo areas before letting them enter Belgium.
Less than a mile away on another road from France there was a similar checkpoint, while police on horseback patrolled the area in between.
“It's more to reassure people than anything else. If migrants want to come, we won't stop them,” said Dominique, a 55-year-old bathroom installer from France, who said he had come to eat and buy cigarettes in Belgium.
Police said the operation would last as long as necessary, noting a huge increase in the number of migrants in the space of a year.
In January 2015 133 people were detained for not having the right papers but one year on that figure was 950, a spokesman said.
“We are seeing more and more people with backpacks. It's a sign that they are not planning to return to France,” said Dewaele.