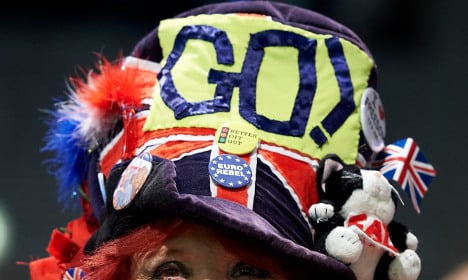 While the views of British expats living abroad have been largely ignored by the UK press, The Local is giving a voice to some of the tens of thousands of British nationals in France in the run up to June 23rd.

And while many are worried, others it seems are hardly concerned by the prospect of Boris Johnson, Nigel Farage and co successfully convincing voters that the best way is OUT.

As I understand it, there are roughly 300,000 Brits living in France.

Like me, the majority are retired folk who contribute hugely to the local economies of their communities. The idea that we are going to be threatened in any way is ludicrous.

Here in Provence/Cote d'Azur, the effect of a Brit exodus would be a sledgehammer to the area's economy. Ditto the 200,000 French working in the UK. Do Hollande et al want to swell French unemployment even further? No of course not.

We need an intelligent debate on the issue and a stop to the pathetic fearmongering of the “yes” campaign. Personally, I think we would be better “out”.

Brits have a different socio-economic outlook to the left-leaning Euro bloc. In the event of an “out” vote, it would be in everyone's interest to negotiate a sensible treaty.

We would not have to renegotiate from scratch; it would be entirely different to the much-quoted Norway/Switzerland/Canada scenarios. We are in and perhaps trying to get out. They are/were “out” & trying to get “in”.

Just imagine the boardrooms of Mercedes/BMW/VW, Peugeot, and, yes, Moet & Chandon saying “That's it, were not selling to those Brits anymore” – come on! Nearly all the comments I have read from British expats are of the me, me, me type.

It's all about pensions and healthcare rather than what is best for the country they have chosen to leave.

Yes, I understand that concern but I don't worry about it at all.

There will be agreements regarding health provision, there will have to be and people forget about the millions of Europeans already in the UK who will be in the same boat as those seeking the good life in their Breton cottage.

I think a Brexit would be good for the UK and good for Europe. According to Tuesday's Times, the Dutch are getting itchy feet about the EU as well so it is not just the UK.

I made the choice to live in France and accept all that that entails. If it means adjusting my lifestyle to remain here – my choice – then I will do it.

People are focusing only on one issue as they believe that it could affect them (one was quoting an Ed Balls speech the other day from 2010 about pensions!) and getting quite hysterical without looking at the bigger picture.

There will always be winners and losers and I believe that the vast majority of Brits will be better off in the long term if we leave. I'll leave the guys in their Breton cottages to continue to scaremonger and get hysterical. It is what is best for Britain that matters here. What does pro-Europe actually mean for British “immigrants” in France? Not fitting in once again, wanting to be treated as a special case: we’ll follow this rule but not that one; we'll agree to this but not that.

Which, if any club actually wants a member with that sort of attitude? Not one, I’ll be bound. Sadly, that’s the attitude that Britain under the Conservatives has always had in its dealings with Europe. This is not political sniping, just a statement of the facts.

Thatcher had a majority behind her when she was stridently hand-bagging the French – and Britain was all for it, cheering her on. No one here though has ever forgotten: ‘I want my money back.’ ‘Federalism by the back Delors..’ ‘No, no, no…’  Like most of the things that she did, she left a damaged legacy, and not only in Britain.

Is it then any surprise that a recent poll by the Independent showed that only 32 percent of the French population actually wanted Britain to remain a member? We're quite simply not seen as Europeans.

Most British here in France would like to see Britain in Europe; lots (but not all) of them here are comfortably retired, have more than one property, and a reasonable pension. This is not my case. I haven’t even half paid off my mortgage, I earn a modest wage, I certainly won’t have a decent pension here and despite having fully paid up my pension in Britain the current government never ceases trying to make us pay longer for less so I now have to start paying again.

I too would like Britain to be in Europe, but only if it brings a constructive impetus: more, together, better and stronger, harmonisation to avoid social dumping – the list is long.

But what’s the point of having a wagon like Britain hitched to the train when it wants to go in the opposite direction, with an avowed intent of no closer union?

If you are an British expat in France and want to get your views on Brexit off your chest and into the open then email the editor at [email protected] Tell us how you will be affected.

SEE ALSO: British in France: It's the uncertainty that's horrifying