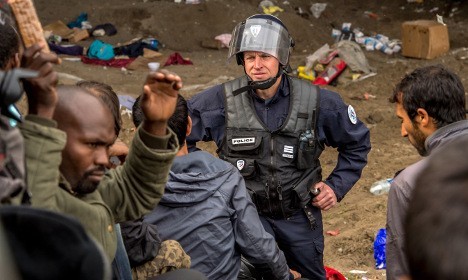 Photo: AFP
Three men and one woman were arrested on Monday for involvement in repeat attacks, a police source told the Direct Matin newspaper.
All the aggressors are in their twenties and originally from Calais, reported La Voix du Nord.
The arrests follow an in-depth investigation by police after summer saw a spate of attacks on the camp's migrants.
A prosecutor said there were two gangs of attackers who were responsible for “at least a dozen assaults”.
Earlier this month, seven men from northern France were held for beating up Iraqi-Kurds with iron bars who were trying to get onto UK-bound lorries. According to reports they beat up four migrants who were waiting by the road to try to board trucks bound for the UK.
There have been numerous reports of migrants in the Calais region being attacked in recent months.
According to Medecins du Monde, a charity working in the area to improve conditions for migrants, the number of attacks has risen since the beginning of the year.
“Tens of people have been beaten up with iron bars in Calais, leaving them with multiple fractures,” one worker said.
The camp, which is home to several thousand migrants, was set to see its southern half evacuated this week ahead of a scheduled demolition, although a French court delayed the move. Charities have slammed authorities for ordering the eviction without any alternatives lined up.