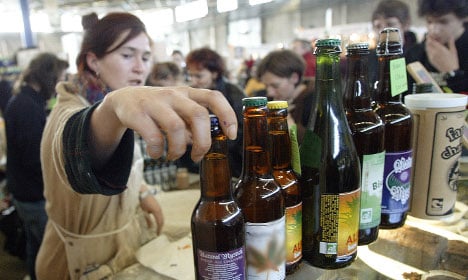 The event attracted 700,000 people in 2015. Photo: AFP
Organizers at the fair have decided that the late-night evenings in the middle of the week will be canned, meaning doors won't stay open until 11pm as usual.
The event's president Jean-Luc Poulain said that just like last year, it was the risk of drunken misbehaviour that caused the move.
“Alcohol-related outbursts” from fair-goers in the past have prompted many farmers to shut up shop early anyway, he said, as people “were getting drunk, irritating the vendors, and bothering the animals.”
“I can't sell tickets when half the exhibitors close their stands early, it wouldn't be fair on the public,” he told BFM TV on Wednesday. He added that the national state of emergency, which was put in place after the November terror attacks in Paris, provided additional headaches considering all the extra security measures that were needed.
The “Salon de l'Agriculture“, which begins on Saturday at Porte de Versailles, will run until Sunday, March 6th. The doors will close at 7pm each night.
With many farmers striking in recent weeks over ever-decreasing prices, there will be an additional police precense to ensure safety is maintained.
Spectators can expect rural fun, plenty of animals, and agricultural machinery.
The event is popular in France, with familiar faces often making an appearance. President Francois Hollande has visited in recent years, and made headlines in 2013 when he made a joke about his predecessor that riled the opposition.
It attracted almost 700,000 visitors last year.