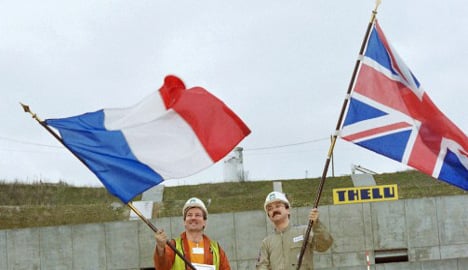 The historic breakthrough in the Channel Tunnel feels a long time ago. Photo: AFP

Tina Louise Beach, who has lived in the Nord Pas de Calais region of northern France for the last ten years, laments that the British government has ignored those who stand to lose the most if a Brexit happens.

Like many retired Brits living in France, news of PM David Cameron's “success” in renegotiating the UK's position in the EU left our household wondering where a vote for Brexit on June 23rd would leave us. Listening to the PM's response to a question from North Thanet MP Sir Roger Gale on February 22nd confirmed those fears:

“I can tell those people what it will be like if we stay, but I cannot be absolutely certain about what would happen if we leave. It would depend on a complex and difficult negotiation, and I think there would be a lot of uncertainty,” said the PM.

“Uncertainty” is the keyword, along with phrases being bandied about like “a leap in the dark”.

Currently we are protected by a raft of EU legislation, which includes receipt of a UK State Pension that rises annually and is protected in accordance with EC Regulation 883/2004, along with other exportable welfare payments.

We also benefit from EU-wide healthcare agreements and feel we reduce the burden on an ailing NHS, which is now referring patients in the South-east of England to our local hospitals in and around Calais for treatment – something that would never happen in the event of Brexit.

Of course, expats are often branded with the common stereotype – rich, champagne-swilling, chateau-owning – that has never brought us support from the UK.

It is also a myth we have seen effectively and efficiently perpetuated by the government of a prime minister who is now asking eligible expats to register and vote on June 23rd to remain in the EU.

It appears to us the government's mendacious propaganda against expats is so successful the UK's main-stream media continues to ignore the effects of Brexit on the estimated 2.2 million Brits living in the EU.

Very little has been said about pensioners who, like ourselves, are living hand-to-mouth since the negative effect of the banking crisis of 2008 on our basic State Pension.

Such is the continuing volatility of the financial markets even news of Boris Johnson MP joining the “Leave” campaign saw an immediate drop in the exchange rate – yet again affecting the income of retired expats.

When challenged on the effect of Brexit on expats, “Leave” campaigners say nothing will change for us.

Their standard response is expats lived happily in Europe before the EU and reciprocal agreements will be put in place.

Well, yes, expats have always resided in other countries but these were mostly of the aforementioned stereoptype – not your very average grandparents who moved to France content to know they could live in relative comfort on their state pension and be afforded the protection of the UK's membership of the EU.

Furthermore, if the UK does not achieve its exit strategy one thing is certain – all provisions will cease immediately and we could be looking at years of wrangling between the UK and France on how to deal with issues of healthcare, requirements of visas and even integration laws, coupled with the possibility of frozen pensions and the removal of exportable welfare benefits.

Since the issue of the EU referendum first came to light, we have investigated the possibility of applying for French citizenship.

However, we feel that our basic Ch'ti French would not be sufficient to achieve this goal. Instead, in the event of Brexit, we would have to rely on Scotland removing itself from the UK and reapplying for membership of the EU in order to use our Scottish citizenship to maintain our EU protective rights.

But whether Scotland can achieve its aim is itself yet another “uncertainty”.

It is this uncertainty – this leap in the dark – that horrifies not only us but many elderly expats, which is why on June 23, we will be firmly voting to REMAIN.

Send us your views.

In the run up to the Brexit we'll be highlighting how some of the 2.2 million Brits living in the EU are feeling.