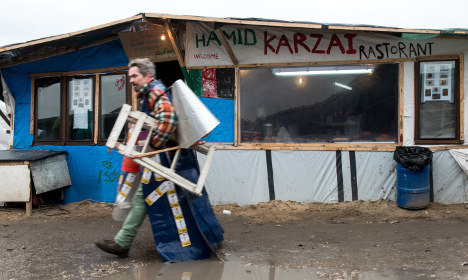 “We have informed the European Commission that we will temporarily depart from Schengen rules,” Interior Minister Jan Jambon told a press conference in Brussels, referring to the 26-country borderless zone.
“We will carry out border controls at different strategic locations, at spots used by smugglers which the police have detected.”
France was to evacuate residents from the refugee camp in the northern port city of Calais on Tuesday, although a French court said it was delaying its ruling on the demolition of half of the site until Wednesday or Thursday.
With most of the migrants apparently set on reaching Britain, Brussels fears many will go to the Belgian port of Zeebrugge to try another route across the English Channel.
“The dismantling of what has been called the 'Jungle' is possible and real. We have already seen a movement of migrants in transit,” Jambon said.
“There is the potential for thousands of migrants coming here — not asylum seekers but migrants in transit who do not want to stay in France or Belgium but to go to Britain,” he said.
“It is an issue of keeping order.”
With Belgium, there are now seven countries in the Schengen area that have reintroduced border controls in response to a record flow of migrants and refugees to Europe fleeing war and poverty in the Middle East, Africa and South Asia.