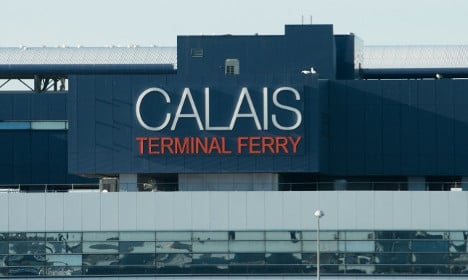 Around 2,000 people took part in the protest on January 23, including supporters from several European countries, calling for Britain to allow asylum-seekers to enter the country.

Towards the end of the protest, a group of 150 people broke through a barrier around the port and about a third made it on board the “Spirit of Britain” ferry.

They were removed by police after three hours, with 24 migrants and 11 members of the No Borders activist group arrested.

Eight of those will receive a verdict from a court in Boulogne-sur-Mer on Monday.

Local authorities estimate there are 3,700 people living in the “Jungle” migrant camp on the outskirts of Calais in northern France, hoping to smuggle themselves aboard lorries crossing the Channel.

The incident in January once again raised questions about security at the port, which has been tightened in recent months with money from the British government.

The French authorities appear determined to finally get rid of the Jungle, moving the residents to proper centres elsewhere in France and away from the filthy camp in Calais, which was set up on a former toxic waste dump.

However, many of the residents have family or community ties to Britain and are reluctant to give up their dream of crossing the Channel.

A campaign in Britain spearheaded by celebrities such as actors Jude Law and Benedict Cumberbatch has called on the British government to let children from the camp be reunited with families in Britain and take responsibility for the “humanitarian crisis” in the Jungle.

Law was among a group of celebrities giving a one-off performance on Sunday in the makeshift theatre in the Jungle.

Demolition of the camp

The storming of the ferry came around the same time as the authorities had cleared out a ring around the edge of the camp, forcing hundreds of migrants to move their makeshift shacks in freezing conditions.

The next stage was an order to vacate the entire southern half of the camp, affecting between 1,000 and 2,000 residents.

Demolition of the section could begin as early as Tuesday night, although it is being challenged by several charities in court.

The judge in the case is due to visit the Jungle on Tuesday before giving a verdict later in the day.

In a statement on Friday, the Calais town hall claimed it was acting in response to “abuses” committed by migrants that had led “an aggravated level of tension” in recent weeks.

It said stones and other projectiles were being thrown by residents of the camp at lorries and security forces on a daily basis, but it also condemned far-right groups that hang around outside the Jungle to beat up migrants.

Those being pushed out of the Jungle can go to one of 98 accommodation centres elsewhere in the country, or into refitted containers put up next door to the camp.

The containers have not proved popular with migrants, who say they lack any communal spaces and restrict their movements, and have been criticised by local charities for failing to meet international standards.