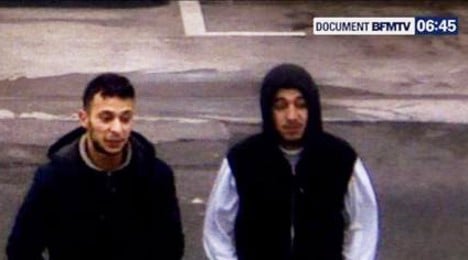 Salah Abdeslam is pictured left at a service station just hours after the Paris attacks. Photo: Police Nationale/AFP
More details are slowly being revealed about Europe's most wanted man, Salah Abdeslam, the man who is understood to have played a key role in organizing the November terror attacks in Paris that killed 130.
According to a report in Le Parisien newspaper, Abdeslam had been stopped for a routine check at France's St. Louis on July 31st last year. The city is directly beside the borders of Germany and Switzerland (see map below).
Abdeslam passed through the check point after showing his ID, which showed that he lived in the Brussels suburb of Molenbeek.
He was driving a Renault Mégane that had been rented in the same suburb, where Abdeslam was living with his family at the time.
The man was passing through France on the way to Italy and then Greece. Le Parisien reported that he travelled back the same way three days later. Also in the vehicle was a 26-year-old man named Ahmed Dahmani, who is currently detained in Turkey.
Dahmani, a Belgian citizen of Moroccan origin, reportedly scouted out targets for the Paris attacks and was arrested in Turkey as he was allegedly trying to make his way to Syria.
The man has close ties to Abdeslam, and his personal computer shows strong links to Isis commandos in Europe.
Dahmani's criminal record shows that he has been involved in at least 50 crimes in Belgium, according to Le Parisien.