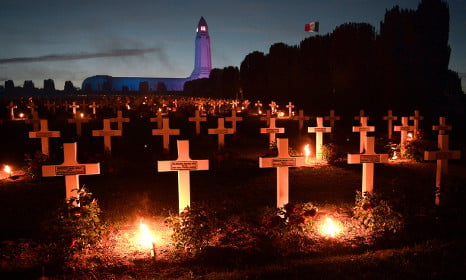 Around 300,000 French and German soldiers died in the 10-month battle. Photo: Frederick Florin/AFP

“It was here, 100 years ago, that the first shells fell,” said one of the actors as the sound of explosions was re-enacted around him.

“Some 1,400 guns and mortars threw up almost a million shells. Nearly 400 guns were focused on the forest of Caures.”

With all the combatants now dead, the commemorations have emphasised educating the young, with thousands of French and German children attending the re-enactment.

“Time has done its work. Today, Verdun is no longer a memory, it is history,” said Thierry Hubscher, director of the Verdun Memorial, which has been renovated for the centenary.

A strong point on the long frontline dividing the French and German armies, Verdun in northeastern France was the target of a German offensive whose aim — according to commander-in-chief Erich von Falkenhayn — was to “bleed France dry”.

One of the most brutal battles in history was waged over a tiny stretch of land and ended with neither side making any significant headway.

Around 300,000 French and German soldiers died in the 10-month battle in which some 30 million shells are estimated to have been fired.

With some three-quarters of France's soldiers having experienced the “hell of Verdun”, the battle quickly embedded itself in the country's traumatised psyche, viewed by the French in much the same way as the British saw the Battle of Somme.

French General Robert Nivelle's stirring phrase, “On ne passe pas” (“They shall not pass”) came to symbolise the essence of national resistance and was appropriated by military leaders across the world in later years.

But behind that mythologising about courage and sacrifice lay horrific carnage.

For Germans, the soldier of Verdun, striving forward under heavy mortar fire became a mythical hero, praised in Nazi propaganda as the forerunner to the regime's own SS soldiers, said German historian Gerd Krumeich, who has co-written a new book about the battle with a French colleague, Antoine Prost.

Such was the trauma of the battle, however, that it took decades before the governments of France and Germany could contemplate joint commemorations.

In 1966, German Chancellor Konrad Adenauer hoped to commemorate the battle of Verdun alongside France's President Charles De Gaulle, but it was deemed too soon, said Prost.

Germany had to wait until 1984 for an official invite, leading to the iconic image of Helmut Kohl and Francois Mitterrand standing hand-in-hand at a memorial ceremony that came to symbolise the new era of peace in the heart of Europe.

Such a moment did not come easily. It was just a few months since Germany had been left out of the 40th anniversary ceremony of the D-Day invasion in Normandy, said Prost.

In all, the First World War killed some 10 million military men and left 20 million injured, many of them disfigured by explosives or poison gas, or reduced to human wrecks by what became known as “shell shock”.