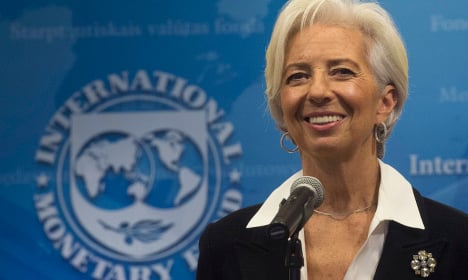 “In taking this decision, the board praised Ms Lagarde’s strong and wise leadership during her first term,” said Aleksei Mozhin, the dean of the Fund’s Executive Board.

“During turbulent times in the global economy, Ms Lagarde strengthened the Fund’s ability to support its members with policy advice, capacity building, and financing.”

Lagarde, 60, formerly France’s finance minister, faced no opposition for the job, after successfully restoring the reputation of the global crisis lender’s leadership following her predecessor Dominique Strauss-Kahn, who resigned under the cloud of a sex scandal in 2011.

But she also built respect for leading the IMF through tough, huge rescues of Greece, Ireland, and Portugal in the European economic crisis.

And she managed to advance reforms of the Fund which elevated the status of the new emerging economic powers like China after decades of domination of the Fund by Europe, the United States and Japan.

Lagarde has “played a critical role in revitalising the Fund’s relations with its global membership, including its emerging market and developing members,” noted Mozhin.

Lagarde said she was “delighted” to accept a second term to lead the IMF, which represents 188 member countries.

“Over the past five years, the IMF has adapted and strengthened its capacity to respond to its members’ needs and is well-prepared to help them meet the challenges of the future,” she said.

“The Fund remains committed to its fundamental goal of helping to ensure global economic and financial stability through international cooperation.”