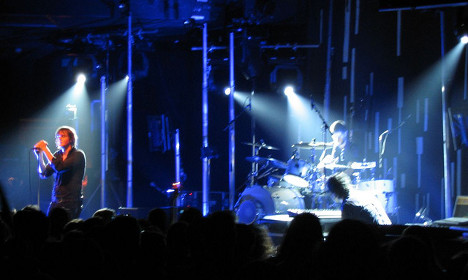 Here you can get a glimpse of Paris's hidden side when the city opens up 90 sites that are normally inaccessible to the public. One of the most intriguing places to visit, if you don’t mind climbing some stairs, is the clocktower at the Gare de Lyon train station.

Just a few steps from the Seine in the 12th arrondissement, the station can boast of welcoming the first European high-speed train in 1981. The clocktower was built in 1900 and was, at the time, the second largest in the world after Big Ben in London.

It’s currently the home of some SNCF offices, so be sure to take advantage of this public opening while you can. At the top, you’ll be treated to spectacular views of the Arc de Triomphe and the Notre Dame cathedral.

February 1st marked the release the 2016 edition of the famed Michelin guide, showcasing the best gastronomic experiences in France and around the world. If you’re interested in the talent behind the world’s top restaurants, you’ll want to check out a photography exhibition at Paris’ Grand Palais in the middle of the month.

“Through this exhibition, Michelin celebrates the influence of French gastronomy,” says the guide. It also mentions that “only about a hundred restaurants in the world today can boast of having three stars.”

The southern city of Nice might have the most famous French Carnival celebration, but there’s a strong case for heading slightly northwest for this festival.

Albi, a medieval city on UNESCO’s World Heritage list, hosts one of the oldest carnivals in France. This Venetian-style festive celebration is a bit more laid-back than in Nice, so you’re sure to enjoy it without being suffocated by tourists.

It’s a time for eating, drinking, dancing, lavish parades, and general merriment. Albi’s carnaval is known for its parade floats, handmade out of cardboard by volunteers in the months leading up to the festival.

The Périgord region takes its nuts very seriously. They’ve been given the AOP label, or “controlled designation of origin”, which specifies the region in which a product must be made.

Happily, this festival is geared not only toward professionals of the nut industry, but also to the ordinary public, with activities for children as well as for adults. You can taste samples and learn about all kinds of different nut products made in the region. There’s even a nut oil contest. Sarlat’s historic center has been nominated to be a UNESCO World Heritage site, so it’s best to visit now before it’s overrun with tourists.

Move over, Cannes. This event is the largest film festival in the country in terms of attendance, bringing over 150,000 filmmakers and short-film buffs from around the world to central France. Films fall into one of three categories: National, International, and Labo, the section for experimental and avant-garde films.

The festival has jump-started the careers of many film directors such as Cédric Klapisch, Jean-Pierre Jeunet, and Erick Zonca. For its 38th edition, the spotlight is on Swedish cinema and the retrospective Star System for space and science-fiction lovers. Most films can be seen with French or English subtitles.

If there’s ever a reason to venture out into the suburbs, this is it. The Winter Sounds Festival is a huge contemporary jazz and world music festival that takes place southeast of Paris. The wide variety of musical groups includes artists such as Mulatu Astatke, Yasiin Bey, Tony Allen, the Hypnotic Brass Ensemble, Dee Alexander Trio, and Illtet.

As a bonus, certain discounts are available for students and seniors. Click here for more info about the lineup and how to buy tickets.

Celebrating Valentine’s Day in the City of Love is a tired cliché. Any couple can go to an overpriced restaurant and declare their love for each other in front of the Eiffel Tower. But did you know that France used to have a Valentine’s Day tradition called a “loterie d’amour” or a “drawing for love”?

For this event, singles would line up opposite each other and call out to each other flirtatiously until they eventually paired off. The women who were left single at the end would build a bonfire and chuck in photos of the men who rejected them while hurling insults and curses. So if you find yourself single this Valentine’s Day, get some girlfriends together and celebrate the traditional way.

If regular skiing is a bit too tame for your tastes, why not try a ski marathon? The Transjurassien is a 76 kilometer race in the Jura mountain range in eastern France, just north of the Alps. It’s part of the Worldloppet Ski Federation, a Swedish association of long distance cross-country skiing events around Europe.

The first day of the event focuses on classic-style race while the second day shifts to free-style. The course connects the towns of Lamoura and Mouthe, the latter of which holds the record for the coldest temperature ever recorded in France. (It’s nicknamed “Little Siberia”.) So remember to dress warmly. Although if you take part in the ski race, you’ll probably be toasty warm. Anyone over 16 and able to provide a medical certificate confirming good health can participate.

This is another great music festival not to miss. This one takes place in several well-known alternative music venues around Paris such as the Point Ephemere, the Trianon, the Trabendo, and Badaboum. The multi-genre music fest features headliners such as Empress Of, L.A. Priest, Saint Sister, and Oh Wonder. Check out the event’s Facebook page for lineup updates and to buy tickets.

Once a year on this hilltop village in southeastern France, when everything starts to bloom and the scent of springtime fills the air, the inhabitants get together to celebrate their agricultural heritage: the violet flower. Violet production was once the town’s main agricultural activity, so every year they proudly celebrate the end of the violet season and the beginning of spring.

The festival consists of shops and homes putting up lavish floral decorations, musical performances and dances, and the display and sale of local products such as olive oil, honey, jams, cured hams, and of course, violets. The day culminates with the Flower Battle, a musical parade through the village.