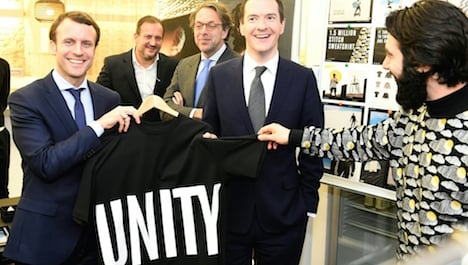 Brexit is a tremendous opportunity. Those are the words of essayist Edouard Tétreau on The Local this week. An opportunity, he means, for France.

He’s not alone in thinking this. Though President François Hollande and PM Manuel Valls both say they want Britain to stay, others in the French establishment, including some senior politicians, don’t. Many others give the impression of being ambivalent at best. They view Perfidious Albion as a pro-market, free trade and English-speaking voice that always standing in the way of European integration.

The position of London’s City as Europe’s top financial centre also grates with France: French unease with David Cameron’s demands to protect the British banking industry have been one of the big sticking points in Brussels this week.

Many Brits would agree that they’re better off out. They complain that the EU has become over-mighty, that it’s strangling Britain with red tape, and that migration from eastern European countries is too high.

They also think that the French will ultimately always stitch Britain up. Partly, that’s good, old-fashioned prejudice, fuelled by feral, Europhobic tabloids. Former Commission President Jacques Delors, a French socialist, was demonised by the British press – the immortal Sun headline 'Up Yours, Delors', summed up the level of debate.

But the way some French politicians speak, British voters' suspicion is sometimes understandable. Tellingly, Britons’ opinion of the EU took a (possibly terminal) nosedive when France led the charge to ban British beef, in a move many took to be anti-British protectionism. Nicolas Sarkozy imperiously telling Britain during the euro crisis that “now would be a good time to shut up,” was one in a long line of similar headlines.

Given the amount of negativity coming out of the Hexagon, it’s a shame that many Brits basically see Europe as a Greater France. Far more Brits speak some (usually mangled version of) French than any other language, it’s the country they visit the most, it’s a country far more comprehensively covered in the British media.

But these days France is just another medium-sized European country, and many more countries out there have a lot more in common with Britain.

The fact is that Britain has lots of friends in Europe. Yes, most of them are fed up with British carping, but they nonetheless have the same views on all sorts of issues, they gravitate culturally towards the UK, and really want Britain to stay.

Scandinavians share Britain’s fondness for free trade and suspicion of creeping federalism. Many eastern European countries see Britain as the key to keeping Europe firmly locked into the Transatlantic relationship.

Even mighty Germany, despite its much vaunted alliance with France, is closer to Britain on lots of questions, including trade, agriculture and the push to make Europe more competitive. Merkel might think the British referendum is a distraction, but she has been uncharacteristically passionate in her arguments for Britain to stay.

It’s also simply not true that only British voters see problems with Europe. What’s striking is that in general terms Brits, French and Germans are pretty much as keen on Europe as each other. A poll on attitudes to the EU last year showed that 51 percent of Brits had a favourable view of the EU, only slightly behind the French and Germans and 55 and 58 percent respectively.

Even France itself has plenty of reasons to want Britain to stay. French Brexit fans should ask themselves whether they really want to get rid of the only other European military power and whether they want the EU they helped create to suffer a decade or more of uncertainty.

Yes, a Britain-less Europe would probably be a more French Europe, but it would also be weaker – and as more liberal states saw themselves frustrated, Euroscepticism would only grow. The only people for whom Brexit is an opportunity are the likes of Marine le Pen – and Vladimir Putin.

As Britain gets ready to decide, French politicians should ask themselves if they really want to risk all that. And those countries that see Britain as a country that shares their values should make sure British voters hear it loud and clear.