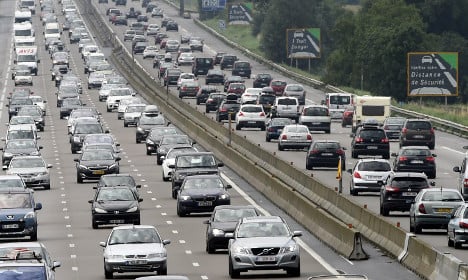 Bison Futé, France’s traffic monitor, has issued an orange alert for all of France on Friday and a black alert for Saturday on roads in the Rhone Alpes region in southeastern France. This is especially relevant to routes in the direction of ski resorts.

With one wave of families heading toward the Alps for their skiing holidays and another returning home, there’s sure to be a lot of traffic on the roads this weekend.

Matters are made worse by an SNCF strike in the region from Friday to Monday. Only six out of every ten TER trains will be in circulation, “with notable disparities in certain zones,” said the SNCF, making it likely that even more travellers will choose to travel by car. The high-speed TGV line is not affected.

Between Lyon and Chambéry and in the alpine valleys, 120,000 vehicles are expected on the roads.

Bison Futé recommends trying not to leave big cities by car between 4pm and 8pm on Friday. It also said to avoid the A6 highway between Paris and Lyon between 6am and noon.

For those returning from ski resorts, it is recommended to leave either early in the morning before 9am or after 4pm.

Adding to the travel chaos is the kickoff of the Netherland's winter holidays; the Dutch make up 14 percent of foreign holiday-makers at French ski resorts.

The train workers on strike are denouncing cuts of “more than 1,000 jobs” in 2016 as well as a a great deal of “reorganization and restructuring”.