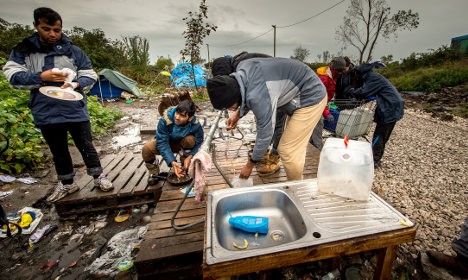 Photo: AFP
Doctors of the World (Medecins du Monde) and Catholic Relief Services, as well as six other NGOs, penned an open letter to Interior Minister Bernard Cazeneuve expressing their “strong opposition” to the dismantling project which was announced by the prefecture last week.
The letter stated that the plan, which will see around 1,000 migrants moved out of their makeshift homes, was not a “genuine alternative”.
“It will only add tensions and further weaken the thousands of exiles that France and Britain are incapable of hosting properly. Not to mention the disastrous effect that this will surely have in France and abroad,” the letter said.
Local French government authorities said on Friday they want to move the migrants out of the camp as conditions worsen in the winter.
The government's local representative, Fabienne Buccio, said: “The time has come to move on, no one must live in the southern part of the camp, everyone must leave this section.” The migrants are to be re-housed in a new centre of converted shipping containers – pictured above – which was set up this winter and can house up to 1,500 migrants, or in other centres around France.
Some 4,000 migrants, most of them from North Africa, the Middle East and Afghanistan, live in the makeshift camp from where they launch their often desperate efforts to reach Britain, across the Channel.
In January some 600 migrants were evacuated from a strip of 100 metres near a main bypass for safety reasons and authorities now want to reduce the massive camp by about half.
In addition to the heated and electrified shipping containers, some 500 women and children are being housed in a separate centre.