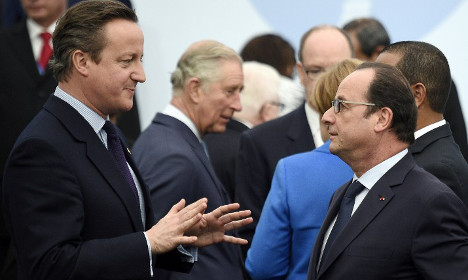 President François Hollande joins other European leaders for the crucial “Brexit summit” in Brussels on Thursday but it’s clear he does not see eye to eye with Cameron.

Leaked papers released to the British newspaper The Guardian on the morning of the summit revealed that France and the UK are still at odds over Cameron’s wish for non-eurozone members to have greater ability to stall financial regulation in the economic bloc.

A mention in the document of a proposed new rulebook for Eurozone and non-eurozone countries was included in square brackets, essentially meaning there is no agreement on the issue.

France is wary that Cameron is simply trying to fulfil his longstanding wish to gain special status for the City of London.

Britain, which does not use the euro, wants a deal that will protect it from ever having to pay into a fund to protect the eurozone.

France, which along with Germany is a key decision-maker in the bloc, reportedly fears this could amount to Britain having a veto over the plans of eurozone countries.

Cameron hopes to walk away with a deal that will allow him to campaign for Britain to stay in the EU in a planned Brexit referendum, that could take place as early as June.

But the PM also faces a tough task to convince Eastern European nations to bow to his demand to impose restrictions on benefits to migrants.

The UK Prime Minister made a surprise visit to Paris on Monday night in a last ditch bid to try and convince Hollande before Thursday’s summit.

However he left empty handed with a French official saying “more work was needed, particularly on economic governance.”

It is clear that many in France are growing tired of the UK constantly placing demands on the EU.

“The British say we want to stay out of the Eurozone but the Eurozone is so important to us that we still want say how it is run and that's not on,” Cohn-Bendit told Europe1 radio.

“If we do this then other countries will just follow and say, 'well you did this for the English so why not for us.”

On the eve of the summit French Prime Minister Manuel Valls said that Britain's exit from the European Union would be “a shock” for Europe but that members could not pick and choose rules that suit them.

“We believe and we hope” that a deal is possible to keep Britain in the EU, Valls told France's parliament.

“Because the departure of Britain would signify … a shock for Europe, but more importantly a shock to the way the world sees Europe, which is already in crisis.”

A summit of all 28 EU leaders will take place in Brussels on Thursday and Friday, at which British Prime Minister David Cameron hopes to win backing for a package of reforms to his country's relationship with the bloc.

Cameron says the reforms are necessary to convince Britons to vote to stay in the EU in a referendum that could take place as soon as June.

Valls said France would be “particularly vigilant” on the issues of free movement of EU citizens, and relations between countries in the eurozone and others.

“Europe should be a place of solidarity between states and we cannot choose 'a la carte' based on what suits us,” Valls said.

“Europe is a whole that we can adapt, but we can't rework it only according to our particular interests, otherwise a line is crossed.”