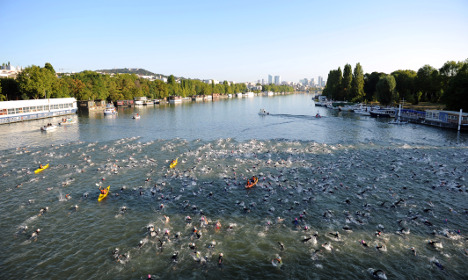 Olympics triathlon to include a swim in the Seine. Photo: Paris 2024
It's down to just four cities to play host to the 2024 Summer Olympics – Budapest, Rome, LA, and Paris – and the French capital was quick out the gates to share its plans.
The Paris Olympic committee revealed on Wednesday how the City of Light would accommodate events at 36 different sites, 26 of which already exist. The other ten are yet to be built, and will mostly be temporary.
As the map below shows, the majority of events would be held in and around Paris, with only a few exceptions.
Here is a breakdown. Click here for a larger map of the venue plan.
The Olympic village is planned to be built at Pleyel – Bords de Seine in the northern suburbs of Paris, just two kilometres away from the Stade de France.
Officials said that the village features 3,500 apartments and an average of 7-storey buildings, with the capacity to accommodate up to 17,000 athletes and team officials. The Stade de France has been earmarked for the Opening and Closing Ceremonies as well as the athletics.
Roland Garros, the venue for the French Open, is planned to host the tennis – just as Wimbledon was the setting of London's Olympic tennis tournament.
The Champs de Mars, the grassy area by the Eiffel Tower, has been selected as the temporary site for beach volleyball. The Tower will also mark the start point for the triathlon. And yes, swimmers are expected to be swimming in the Seine River.
The Invalides Esplanade, near the tomb of Napoleon Bonaparte, would play host to the archery competition (and will also be temporary). (Could Zlatan's home grounds be the home of Olympic football? Photo: Psgmag.net/Flickr)
Bercy Arena, in the 12th arrondissement for judo and basketball. These sports would also be played in Arena 92, the new stadium in Nanterre, the western suburbs of Paris. There are also plans to build a Bercy Arena 2 right next door.
The Zénith arena in the 19th arrondissement is bookmarked to host the boxing.
Golf National de Saint-Quentin-en-Yvelines for the golf, which will enter the Olympics as a sport in the next Olympics in Rio. The course is near Versailles, south west of Paris.
Base nautique de Vaires-sur-Marne, in the Seine-et-Marne department to the east of Paris, would host rowing, canoeing and kayaking.

The velodrome at Saint-Quentin-en-Yvelines would hold indoor cycling races and BMX events.
The park at the Château de Versailles would host equestrian events.
Football would be spread between stadiums in Marseille, Toulouse, Bordeaux, Nantes, Lille, Lyon, Saint-Etienne and Nice.
The Paris Expo Porte de Versailles has been scheduled for the handball and the table tennis.
Élancourt Hill, seen from above in the image below, is planned to host the cross country mountain biking. The hill is a little further out from Versailles, to the south west of Paris. Le Stade Yves-du-Manoir, to the north west of Paris, for the field hockey.
La Marina de Marseille, off the coast of southern France, for sailing (see below). Following the games, the Marina will resume its role as a public marina as well as a training centre for the national sailing team of France, officials noted. The Champs-Elysées avenue would host the end of the road race, while the Bourget area to the north east of Paris will host badminton and volleyball. Paris last hosted the summer Olympics in 1924, losing out to Barcelona in 1992, Beijing in 2008, and London in 2012.
The host city will be announced on September 13th in 2017 – and if it were up to Paris Mayor Anne Hidalgo (who is pictured below with the new Olympic logo), Paris would be taking home the gold.

“The strength of a dream! Paris is a candidate to win”