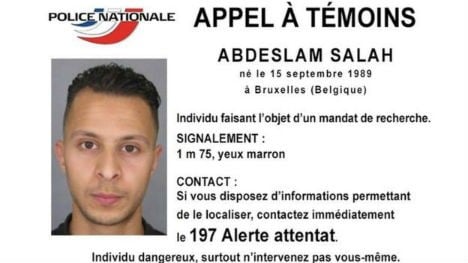 Calling the investigations “highly complex”, Salzburg prosecutors said that all four are believed to belong to the so-called Islamic State extremist group, which claimed responsibility for the Paris attacks.

The officials said that in addition to an Algerian and a Pakistani, whose arrest on December 10 was announced several days later, two others have been detained since December 18.

The first two, aged 28 and 34, were believed to have been in the same migrant boat travelling to Greece as two men involved in the Paris atrocities that killed 130 people, prosecutors said in a statement.

While those involved in the attacks were able to travel onwards, the pair now in Austrian hands were held up by Greek authorities for 25 days because they were carrying fake Syrian passports.

They then arrived in Salzburg in western Austria at the end of November — after the Paris killings — and Austrian police arrested them at a centre for migrants on December 10.

Eight days later, the other two, a 25-year-old Moroccan and a 40-year-old Algerian, were arrested “because of indications of close contact with both the first two suspects,” prosecutors said.

The statement stressed that contrary to some media reports, the men had not confessed to planning any attacks.

Prosecutors added that two other men, aged 22 and 28, who said they were migrants were arrested in Salzburg on September 17 and October 10, after recounting that they had fought for IS.

There is however no evidence that these two were involved in any attacks in Europe, nor of any links to the other four men detained, prosecutors said, although investigations were continuing.

Meanwhile, the police chiefs of five countries on the migrant route through southeast Europe announced an agreement Thursday for a joint refugee registration point at the Greek-Macedonian border.

Macedonia, Serbia, Croatia, Slovenia and Austria will jointly profile and register migrants from war-torn countries and then organise their “controlled transport” through to Austria, Croatia's police director Vlado Dominic said.

“We made an agreement on the joint profiling and registration of migrants at the Greek-Macedonian border,” Dominic told reporters, saying the plan would take effect immediately.

He said the profiling of refugees would be done through interviews.

The aim is to ensure that those who do not meet the register's requirements “stay in Greece and Turkey,” he said.

The refugees would then be transported in bus and train convoys to Austria, where Austrian police would take over and migrants heading for Germany could “continue further”.

“Our goal is that the refugees' transfer from Greece to Macedonia, and later to Austria, is as painless as possible,” Dominic said.

He said that joint profiling, instead of each of the five nations profiling migrants individually, would prevent the travellers from being shuttled back from one country to another.

The new plan comes after Croatia sent 217 Afghan, Syrian and Iraqi refugees back to Serbia late Tuesday for reasons that were not immediately clear, according to the UN refugee agency.

But Dominic said: “If profiling and registration is done well, there should be no returns”.

Bulgaria and Albania would also be consulted about their inclusion in the plan in case they begin to receive large numbers of migrants, Dominic added.

The police chiefs agreed that no migrants would be allowed to join the convoys except those registered at Gevgelija on the Greek-Macedonian border, where each of the five nations would send extra personnel to enforce the plan.

There are currently 83 officers from the five countries at the frontier, where Macedonia last week began building a new razor-wire fence parallel to an existing one to make it harder for illegal migrants to enter.

Since November only refugees from Syria, Afghanistan and Iraq have been allowed to cross the border on their journey to western Europe and this year more than 80,000 refugees have been registered entering Macedonia.

But migrants from other countries have still tried to get across — Macedonian police said they stopped about 4,000 people trying to cross illegally in January alone.

Austria meanwhile has said it intends to cap its daily number of asylum claims at 80, and this year plans to admit only admit 37,500 asylum seekers, down sharply from the 90,000 who applied in 2015.

Vienna defended its toughened line Thursday, saying ahead of an EU summit that its unilateral measures were necessary because of a lack of EU “solidarity”, in particular from France.

But the European Commission urged Austria to reconsider its plans which it warned would be “plainly incompatible” with European Union laws.