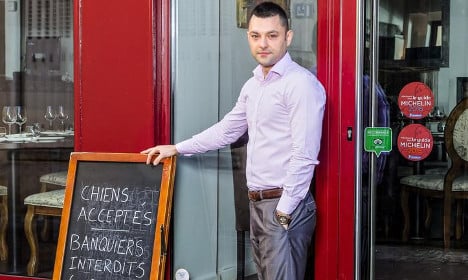 Alexandre Callet, aged 30, who runs the gourmet restaurant Les Ecuries de Richelieu, has banned financiers not because he’s a “raving socialist” but because he believes in an ail for an ail*.

Callet is furious with the banking world after numerous firms turned down his request for a €70,000 ($78,000) loan to open a second eatery.

The blackboard outside his restaurant in Rueil-Malmaison, a well-to-do suburb to the west of Paris, normally displays the list of daily specials but it now reads: “Dogs welcome, bankers banned (unless they pay an entry fee of €70,000).

“I believe in reciprocity,” Callet told The Local on Wednesday. “I had to respond. ‘If you hit me, I’ll hit you’”.

“As soon as I see a banker that I recognize I won’t let them enter my restaurant.

Callet says he felt humiliated given that he was only asking the banks for a loan of €70,000, which he says is “nothing” considering his turnover for last year – his best one yet – was €300,000.

“This is not just a kebab shop. My restaurant is in the Michelin guide and film stars come in here,” said Callet. “A lot of bankers who turned me down know me. They come in here.”

It’s not the first time Callet has had beef with the banks. When he tried to open his first restaurant, aged just 23, he says he was turned down over 20 times before one bank agreed to lend him money.

The 30-year-old says the banks' treatment of him is reflective of the shameful way business owners are treated in France by banks unwilling to lend money to young business owners.

“Restaurateurs, entrepreneurs, it's the same. We have to get on all fours,” he said.

“I have never had financial problems and yet I find myself in this situation. Bankers are not doing their job. That’s why we have so many businesses in France who have to resort to crowd funding.

“France has problems understanding this. That’s why London has become the sixth French city,” he said.

“It’s the problem with our ‘socialism à la Française’. We have more civil servants than anywhere in the world, we have a social welfare system that has a bigger budget than the American defence budget.

“There’s the 35-hour week. There is globalization, yet our businesses are completely blocked. We can’t find oxygen,” said Callet who has been forced to ditch plans to open a second diner.

Callet says he has yet to turn away anyone on the grounds of being a banker, but if you work in a finance and fancy a bite to eat, it might be wise to dress down for the occasion.

*Ail of course is the French word for garlic. Please excuse us for not being able to resist this pun.