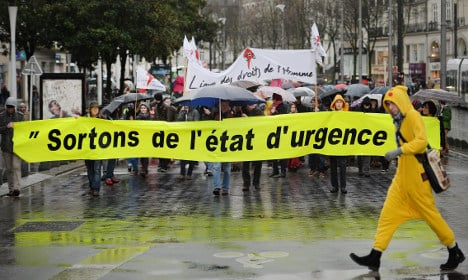 The French parliament voted to extend the country's state of emergency, implemented after the November 13th terror attacks, by a further three months to May 26th as the government warns the threat of an attack remains great.

Deputies of the National Assembly gave the green light by 212 votes to 31 with three abstentions The upper house Senate had already approved the extension by an overwhelming majority last Tuesday.

Interior Minister Bernard Cazeneuve said the terror threat “has never been higher”, stressing that “an imminent danger has not gone away”.

The exceptional measure allows the interior minister to place under house arrest any person whose behaviour is considered “a threat to security and public order” and to order searches of homes at any hour without involving the court.

Since November, around 3,340 searches have been conducted and 578 arms seized. More than 340 people have been taken into custody and 285 house arrests are currently being enforced. Since the beginning of the year, 40 people have been arrested on suspicion of being involved in networks making threats or praising terrorism, Cazeneuve said.

Facing criticism about the modest number of arrests, Cazeneuve pointed to the advantages given the interior ministry under a state of emergency.

The searches “have been able to disrupt the organization of the networks which arm and finance terrorism, in particular with regards to the trafficking of arms and drugs,” he told lawmakers.

He added that the elements collected contribute to the files of information which can be used later in cases against terror suspects.

The Council of Europe however has expressed concerns about “some abuses” committed by “police officers” during some rather violent searches. It also said that the state of emergency has reinforced “the stigmatization” of Muslims in the country.