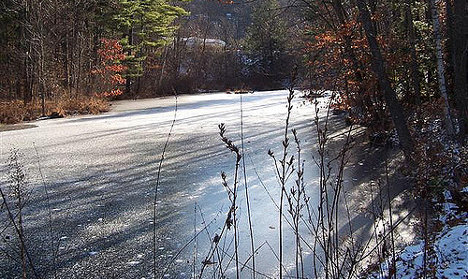 The woman was reportedly pushed into an icy pond. File photo: mema_nh/Flickr
The incident occurred at a dairy farm near the village of Farguettes, north of Toulouse (see map below).
A woman in her mid twenties who was visiting the farm was allegedly pushed into an icy pond at 7:30am by the farm owner's brother, reported the Centre Presse Aveyron.
The woman went into cardiac arrest, and died around 90 minutes after the altercation.
Police were quick to the scene and took the alleged aggressor into custody.
Agriculture Minister Stephane Le Foll took to Twitter to explain that the woman's visit was a consultancy (une démarche de conseil), and not an inspection (controle).
He also shared his sympathies with the woman's friends and families.
It is understood that the woman was there to give advice to the farmer about his milk samples, but it remains unclear at this point why the man decided to push the woman into the pond.
A police investigation into homicide has been launched, reported Le Parisien newspaper.