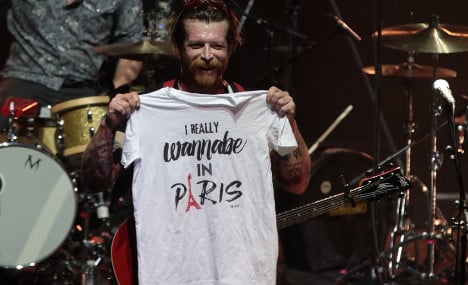 Despite fears the concert could bring back the trauma of November's slaughter in which 90 people died, the group whipped the crowd into a frenzy of joy, with fans embracing each other in tears at the end.

Eagles frontman Jesse Hughes bounded off the stage to hug a survivor in her wheelchair, as the night wore on and the emotion grew.

The ultimate rock showman, who smashed his guitar on stage at one point to wild applause, had choked up the night before as he told AFP how he feared “falling to pieces on stage”.

In the event, he turned in a bravura performance that many fans hailed as his best.

Deafening cheers and applause rang out as the group began their set, with many survivors — including the band — hoping the gig would help them turn the page on their ordeal.

Rich in symbolism, the Eagles appeared to the playback of an old song “Paris s'eveille,” “Paris Wakes Up,” a portrait of a city about to begin a new day by French singer Jacques Dutronc.

The band then tore into a favourite song, “I Only Want You,” but stopped halfway.

“Let's take a moment to remember, then we will get back to the fun,” said drummer for the night Josh Homme, Hughes' best friend and lead singer of Queens of the Stone Age.

Eagles of Death Metal were playing at the Bataclan concert hall on November 13 when jihadists opened fire on defenceless fans.

The assault was the bloodiest in a string of attacks in central Paris and the national stadium that left 130 dead and 350 injured, many grievously.

Some survivors looked to the return of the band as a moment of catharsis, although some psychologists feared it could be too soon.

There were no scenes of panic, although Emmanuel Wechta, who is on crutches because of his wounds, said: “I did look at my watch after 40 minutes, which was when the killers came into the Bataclan, but it was fine. “I wasn't there for therapy but to enjoy myself and that I did. I really succeeded in letting myself go,” the 42-year-old said.

But 26-year-old Alexis, who survived the massacre by playing dead for two hours, had a more troubled night. “About three-quarters of it was very hard for me. I was sitting beside the injured on the balcony three metres from an exit, but I stayed.

“The thing that I found most difficult was the snare drum, which made me think of the sound of the shooting at the Bataclan.

“But in the end it was a very positive evening — I succeeded in going out to a concert,” he said.

From the start it was clear the Eagles were putting their trust “in the healing power of rock 'n' roll”.

“We are having a good time tonight — amen!” said the flamboyant frontman Hughes, who is also a preacher.

“Ain't nobody going to stop us.”

A fan gave him a homemade scarf of the tricolore, France's national flag, which he proceeded to drape over the drum kit.

Hughes, wearing a black “Mon Amis” (“My Friends”) tour T-shirt and trademark red braces, pointed to Homme, saying: “That's my best friend in front of me. “But I have got a whole shitload of best friends here, too,” he said, pointing at the audience.

He dedicated a song, “Secret Plans,” to Nick Alexander, the band's merchandiser, who was among those killed at the Bataclan.

But the highlight for many, including Internet moderator Alexis, was when Hughes appeared alone on stage near the end with a tricolore guitar to sing the Rolling Stone's “Brown Sugar”. “From the moment we all sang the chorus together I was fine right to the end of the concert.”

“You are stuck with me now! I'm Parisian now! I needed you so much and you did not let me down,” shouted Hughes.

“I am so drunk with this (moment) I cannot walk off this stage. Can you not see that?” 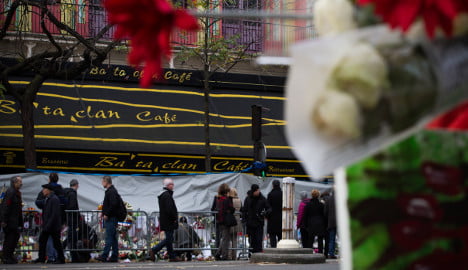 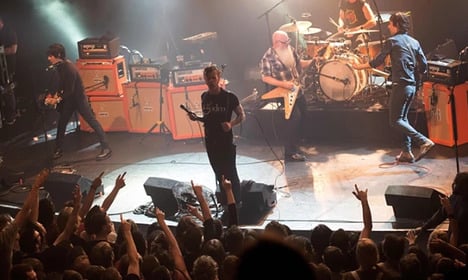 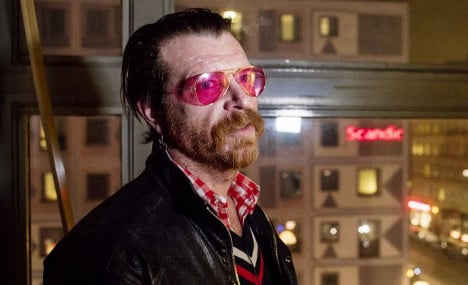 EAGLES OF DEATH METAL
Eagles of Death Metal singer: ‘I want everyone to have guns’
Url copied to clipboard!