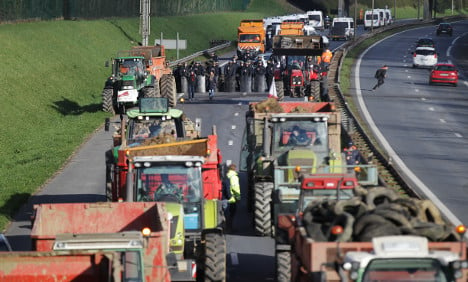 Farmers blocking roads in Caen on Monday. Photo: AFP
French farmers have hit the streets of France to protest against the falling prices of dairy and meat products.

Rennes in the west is particularly badly affected, with the city's ring road to be blocked from 11am on Wednesday. Newspaper Oeust-France reported that around 1,000 tractors were expected to circle the city until 5pm.

“Take care on the roads of Brittany, the tractors are piling up at Rennes!” says this tweet from local newspaper Le Télégramme.

Farmers also demonstrated in front of the headquarters of the ASP (Services and Payment Agency), in Montreuil, outside Paris.

Below, a sculpture of a lamb is covered in stickers demanding a 'stop to agricultural norms'. A banner below reads: “The administration kills farmers”, while the sign on the tractor reads “Fed up with standards”.