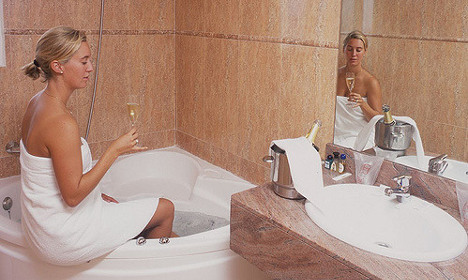 Photo: Amic Hoteles Hotel Horizonte/Flickr
The idea of selling a hotel room by the night in France is seriously outdated, according to booming French startup DayUse.
The company, which was formed five years ago, teams up with hotels to sell their own rooms at an hourly daytime rate, which is up to 75 percent cheaper than the hotel's typical rate.
And investors are listening. The group has just pulled in €15 million to expand on operations that are already in 14 countries and 100 cities around the world (including New York, London, and of course Paris).
On the group's website, guests are invited to book a room for as little as two hours – or a “daycation” as some refer to it – and don't need to use a credit card to make the reservation (wonder why?).
So surely its success in France – it now counts over 100,000 customers – is down to the legions of unfaithful French couples famed for their relaxed attitude to extra-marital affairs – looking for a quick, cheap and slightly immoral escape?
The French press have certainly been quick to question it, with Le Parisien trumpeting that the “5-7 was making a comeback at hotels”, referring to the time of day that Frenchmen traditionally see their mistresses before heading home to dinner with their families.
DayUse's founder David Lebée insists that's not the case with most of their clients made up of weary professionals needing a rest during the day as much as lustful couples escaping real life for an afternoon.
“At first there was a cultural taboo around infidelity, but that is decreasing bit by bit. We are not there to judge,” he told Le Parisien newspaper adding that rooms were available in luxurious palace hotels in Paris for between €40 and €180 during the day.
DayUse's US market head Maud Chabanier was keen for the company not to just be associated with cheating couples, but a real and more innocent consumer demand.
SEE ALSO: French reputation for infidelity is just a myth?
She told The Local that while people may associate hotel rooms during the day with husbands and wives having illicit affairs, the idea that the boom is down to French couples “playing away from home” is unfair.
“The French are glamorous, they kiss in the street, they like love affairs… but it's really just a cliché,” she said.
“We have a big leisure clientele who like having access to boutique hotels, and part of these are couples – but they're not necessarily illegitimate.”
And of course, there are no figures for how many of the 100,000 French users are using the rooms for an illicit after-work romp.
That view tallies with the opinion of Noel Biderman, the founder of extra-marital affair site Ashley Madison.
In 2013 when the company set up in France, Biderman told The Local that infidelity was alive and well in France, but no more than in any other country.

“There’s some mythology here. I don’t think they are more or less unfaithful than anywhere else,” Biderman said.

Perhaps then it is not that the French have more affairs than, say, Americans… it's just that they keep getting caught. Are they more carefree or even more careless than in countries?

“The French are like people everywhere in that they don’t want their partner to discover the fact they are having an affair. They try to keep their affairs secret the way the Americans or British do,” Biderman says.

Regardless of why people are using DayUse, it's apparently working for them, including for French hoteliers who have suffered due to the rise in Airbnb as well as last year's terror attacks.
The hotels that have used the company have seen a ten percent increase in revenue on average, says DayUse's Chabanier, as they've been able to sell a number of the rooms twice.
What's more, the service comes at no extra costs considering the cleaning staff are already on hand.
“We are revolutionizing the traditional hospitality industry,” Chabanier tells The Local.
“While hotels work to sell their rooms at night, we work during the day time, making the most of the fact that 70 percent of hotel rooms in business areas are empty during the day.”
Chabanier explains that unlike companies such as Airbnb, which are competing with hotels to pull in customers, Day Use works together with the hotels to fill their beds.