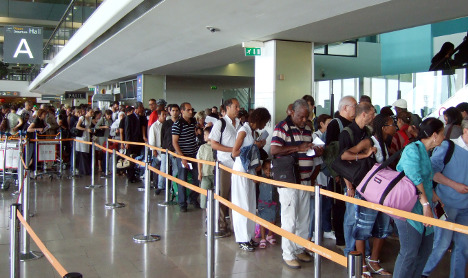 File photo: AFP
Border control officers in Paris are fed up with their working conditions, and they're taking matters into their own hands.
On Saturday morning, they spent up to three times as long as usual checking passengers' passports at Paris Orly and Paris Charles de Gaulle.
This meant some passengers were forced to wait up to two hours just to get their passports checked, reported Le Parisien, and that around 20 flights were delayed.
The atmosphere was “tense” among the thousands of passengers who were backed up, reported Le Figaro, with many taking to social media to blast the airport workers.

The main gripe of controllers is that longer-serving workers have lost certain job perks.
The union representing the workers is meeting with the interior ministry on Monday, threatening further disruption if they're not satisfied with the government's response.
Thierry Maze, the head of the union, said the protests would be even stronger than Saturday's.
“If nothing changes we will mobilize again on Friday the 19th, then we will ramp it up until the Euro 2016 football in France,” he said.