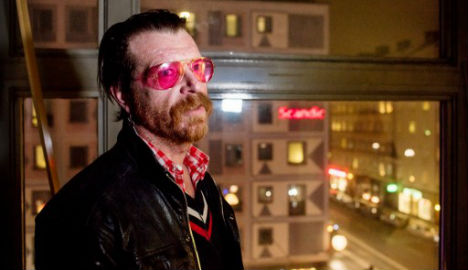 Jesse Hughes prepares for Saturday's gig in Stockholm. Photo: Gustav Maartensson / AFP
Next week the Californian band will return to Paris to “finish” the fateful November concert, which ended with jihadi gunmen killing 90 fans.
About 1,000 fans turned out in Stockholm, with frontman Jesse Hughes alluding to the Paris tragedy, telling the audience: “After all these weeks, we needed you, we really needed you tonight.”
But it will be the return to Paris that will be most emotional for the group and its French fans, many of whom lived through the carnage, including some who are still being treated for their injuries.
“The show isn't (just) a show in Paris…. It has a purpose and a responsibility which is far beyond just dancing,” singer Hughes told AFP.
He said he had felt “a sacred duty” to go on with the show.
As the tears rolled down his cheeks, Hughes told AFP he was ready to return to the French capital on Tuesday to finish the concert that was so tragically cut short on November 13 when gunmen stormed the Bataclan music hall, opening fire on the 1,500-strong, mostly young crowd.
“I take it as a very sacred duty. I feel we were elected by circumstances to represent this for good or bad. I take that as a responsibility I'm charged by God to do,” Hughes, a fervent Catholic, said in an emotional interview in Stockholm, where the Californian band played their first tour gig since the
attacks.
Jihadists killed 130 people and wounded many more in a series of coordinated gun and suicide bomb attacks across Paris that night in November.
The worst violence was at the Bataclan, shortly after the band took to the stage. Hundreds of fans were injured by gunfire, and Hughes said he planned to meet some of the survivors while in Paris in the hopes of offering some comfort.
“There's a lot of kids who were injured who didn't die who are really fucked up physically and if me just coming to visit is gonna help them that's fucking great and there's nothing more important in my life,” Hughes said.
The Eagles of Death Metal (EODM) already briefly reappeared on stage in Paris alongside U2 in December, in a highly-charged concert that paid tribute to the victims, but the start of their rescheduled Nos Amis Tour marks the band's official comeback.
“It was our friends who were attacked and died, this tour has to have some kind of meaning about that so we can leave it there and go on and be a band again,” said Hughes, who admitted that he uses his music as “therapy” to come to terms with the trauma of the Bataclan bloodshed.
“I'm fortunate, I have experience with dealing with my emotions via music,” he said.

Wearing a red-and-white checked shirt and with rose-tinted glasses resting on his head, Hughes said he would not give in to either hatred or fear.
“There's no way the bad guys are gonna change what Eagles of Death Metal is… No one is going to make me stop being me, no one.”
He said he would vent his feelings in song, the way he has done in the past, and expose the jihadists for the “fools” they were.
“It's not going to fill me with hate,” said the bearded 43-year-old. “I'm an open book with my fans, this is my therapy but sometimes it feels like you can't breathe you know,” he told AFP. “I'm going to put it there (in song), I'm good at that.”
But there's no denying the experience has changed him, and the singer — a member of America's National Rifle Association — said he now always carries a gun to protect himself.
“I don't go anywhere in America without a gun anymore. That sucks. And I'm not paranoid. I'm not a cowboy… but I wanna be prepared.”
While the Bataclan has yet to reopen after the tragedy, Hughes said he wanted EODM to be the first to return to the venue.
“We need to be the first band there, we need to walk into that placeunafraid.”
The band will appear on stage in Oslo on Sunday before playing Paris's Olympia concert hall on Tuesday.
The Austrian duo White Miles, who opened for EODM on that fateful night at the Bataclan, have joined the band on tour again as their support act.